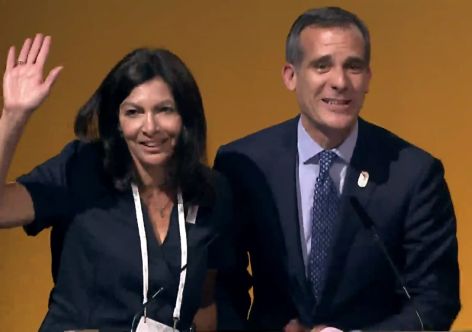 (ATR) The International Olympic Committee votes to award the 2024 and 2028 Olympics at the same time.

The IOC approved the change at an Extraordinary IOC Session in Lausanne on July 11.

Los Angeles and Paris are the two cities in the running for 2024 but the IOC has chosen to see if both can agree to one of them hosting 2024 and the other for 2028. They would be confirmed in a single vote at the IOC Session in Lima Sept. 13.

IOC vice president John Coates, who worked on the proposal with the three other vice presidents, says the change would still require a tripartite agreement between the IOC and the two cities.

He says negotiations in the coming weeks will determine whether the two bids will settle on one for 2024 and the other for 2028.

"Implicit in that agreement is that one of them would put their hand up for 2028 and they would vacate 2024," Coates told the Session.

Without the agreement, Coates says the IOC will only vote for a 2024 host at the Lima IOC Session. An Olympic Charter change will not be required to accommodate the revised procedure.

Bach has appointed the Patrick Baumann-chaired 2024 evaluation commission to transition to take on the same job for the 2028 candidate if one emerges in the deal-making. "They will be asked to pay particular attention to the various issues that you [IOC members] identified today, the risks of making this decision an additional four years out [for 2028]," Coates said.

"We’ll struggle to get the report for Lima but it won’t be much after that."

Prince Imran questioned the plausibility that either LA or Paris would be willing to concede for 2028 and raised a number of other what-ifs.

"You’re assuming someone would go for 2028, but it's not clear from today’s presentation that that would happen, although there was a hint," Imran said. "They’ve got to look at their constituencies."

"And if we do agree to vote for one and then the other, do we actually go to a vote then in Lima? Because you only have one candidate for 2024 and one for 2028, so is the membership going to have an opportunity to vote? There might be one candidate but you must give the members a chance to vote."

Canadian IOC member Pound said: "I agree that the double allocation is probably a great idea. It buys us some time to take a longer term view of how we attract and encourage candidate cities."

Pound questioned whether it was necessary to bring the LA and Paris Olympic bid circuses to Lima if a deal had been reached, mainly for cost reasons.

Bach said the IOC should not impose anything on the bids as to who and how many officials they bring to Lima for the vote in September.

"My gut feeling is they would appreciate the opportunity to present their city on the world stage and we should not prevent them from doing so. If they have a different opinion then we should be flexible," Bach added.