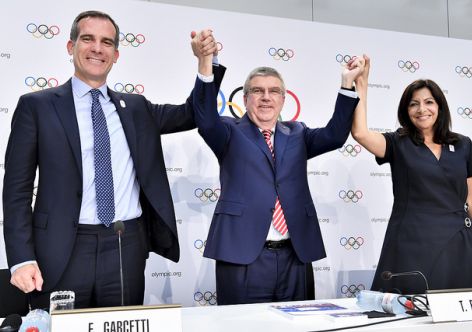 (ATR) Los Angeles Mayor Eric Garcetti says the International Olympic Committee has made the 2028 Olympic hosting rights "so attractive" that the city may forego its aspirations for the 2024 Games.

"They are making it financially – and we’re negotiating this because we have some leverage – financially so attractive we’d be stupid not to take 2028," Mayor Garcetti told BuzzFeed Editor-in-Chief Ben Smith during an event near LA on July 26.

"The bid is all but done, we have won," he declared. "Twenty-four is not probably most likely to happen even though the Olympics would be smart to pick us for 2024 because LA has always rebooted the brand."

Sources in Los Angeles familiar with the matter tell Around the Rings that LA 2024’s stakeholders have already begun making preparations for the 2028 Games. For instance, the University of Southern California has made its facilities available for the 2028 Games where LA plans to house its Media Village.

Unlike in LA, land availability for the Olympic Village in Paris is only cleared through 2024, another factor that helps tilt the scales towards Paris for 2024.

LA and Paris are the final two contenders in what began as a five-city race in 2015. However, the failure of multiple cities in consecutive Olympic bid races has led the IOC to set aside its standard procedure and seek a tripartite agreement with LA and Paris where one city would host 2024 and the other would take 2028.

Garcetti tells Smith that negotiations with the IOC have been underway and reiterated his goal of receiving concessions from the IOC if the city would raise its hand to host the 2028 edition.

"My dream with the Olympics is not just to host the Olympics, but to make sports free for every kid here starting in a year or two through our city’s Rec and Parks programs, or a 10 dollar fee, something token which would make us the healthiest city in America."

Garcetti does not fully admit that the city is going to take the 2028 Games and allow Paris to host 2024. However, he implies that if the city does not agree to 2028, a normal vote from the IOC whether LA or Paris should host only the 2024 Olympics may not be in the bid’s best interests.

"America has never won a competitive bid for the Summer Games except for Atlanta [1996]," Garcetti notes. "We always get it because no one else is left. But after we do the Olympics, there’s usually a line of cities that want to do it, and so the sooner the better."

Many French media sites ran with the BuzzFeed interview as a concession from Garcetti, running headlines such as "Mayor of Los Angeles gives priority to Paris for 2024" and "Los Angeles Rolls Out The Red Carpet In Paris For 2024".

Despite negotiations, 2024 Evaluation Commission chairman Patrick Baumann tells ATR that both cities must project themselves hosting the 2028 Games so his commission can make a full assessment about potential risks and challenges that arise with hosting the Games four years later than originally planned.

With these latest comments, Garcetti all but seals LA’s fate as host of the 2028 Games without explicitly saying it, instead flip flopping between definitive statements and hedging his bets.

"We will win and it will be the first time since 1996 that we will bring the Olympics back," he says before adding, "next week we’ll announce our official intentions if we are going to go for 2028 instead of 2024."

Any tripartite agreement between the two cities and the IOC would still have to be ratified by the full IOC membership at its Session in Lima, Peru on Sep. 13.