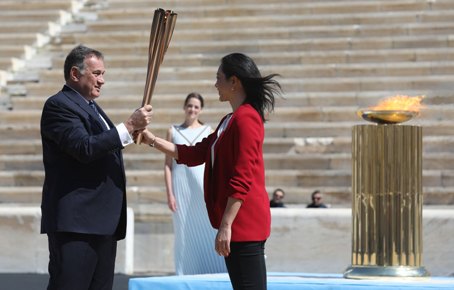 (ATR) The flame for the Tokyo Olympics is handed over in a quiet ceremony in Athens, spectators not welcome.

Lit in ancient Olympia a week ago, the flame was transferred from Greece to Japan in a bare bones ceremony at the Panathenaic Stadium. The marble stadium, site of the 1896 Olympics, was nearly empty.

The muted ceremony is one of the manifold consequences of the corona virus pandemic being felt worldwide, including Greece.

"It was strange and very emotional," Hellenic Olympic Committee President Spyros Capralos tells Around the Rings about the experience today in Athens. He’s been part of a number of flame transfers, all of them far more elaborate and bursting with dignitaries, spectators and a military band. The Olympic Channel streamed the event live.

Greek Olympian Eleftherios Petrounias carried the flame in a lap around the stadium, handing it to pole vault champion Katerina Stefanidi. They were to be the last two runners in a national relay that was cancelled last week a day after it started. Crowds of people along the route of the torch relay led the government to halt the relay.

Once the cauldron was lit, Capralos lit a torch he passed to Japanese Olympian Naoko Imoto.

Imoto, 43, who swam for Japan at the 1996 Olympics, was selected to represent Japan only hours before the Athens ceremony. Officials fromTokyo 2020 had decided not to travel from Japan to Greece for the transfer due to quarantine issues they would face due to counter-corona measures.

Imoto was available for the ceremony as she was already in Greece working for UNICEF.

"We bid farewell to this great Olympic symbol, which brings together humanity, antiquity and modern times," Capralos said in remarks at the stadium directed at Japan.

"I wish to believe that the journey of the Olympic flame in your country will offer joy and hope to the people of the whole world, who are currently in pain and challenged," said Capralos.

A military plane will carry the flame back to Japan split into three separate brass safety lanterns. It will arrive March 20 at an air base in Miyagi prefecture ahead of the March 26 launch of the Japanese leg of the Olympic Torch Relay. More than 10,000 runners are supposed to carry the flame across the country until opening ceremony July 24.

In keeping with precautions for corona, the arrival ceremony in Japan will be low-key. Children once invited to take part in the arrival will no longer attend. Using a military base will prevent any crowd from gathering. Crowds, too, will not be welcome along the torch relay route in Japan. Same goes for the end-of-day ceremony that is traditionally a community celebration that draws hundreds or even thousands to see the Olympic flame.

Once planned as a noisy and joyous four month prelude to the Olympics, the torch relay in Japan will now be deemed a success if nobody turns up to celebrate.