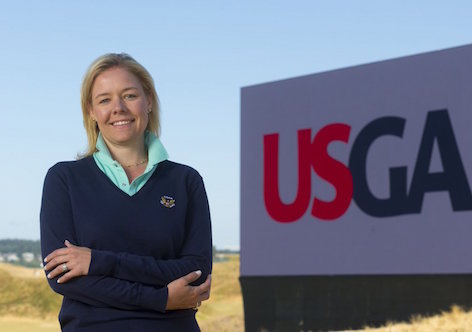 Hirshland has been chief commercial officer for the United States Golf Association since 2011.

Prior to the USGA she was senior vice president for strategic business development at Wasserman Media Group, the Los Angeles company owned by LA 2028 chairman Casey Wasserman. The firm is now known simply as Wasserman.

Hirshland was hired after a nationwide search to replace Scott Blackmun who resigned in February due to cancer treatment.

She comes to the USOC in the aftermath of the USA Gymnastics sexual abuse scandal as well as cases of athlete abuse in other Olympic sports under the umbrella of the USOC.

"The USOC is at a critical time in its history and requires an energetic, creative and inspiring leader who is capable of building on past success while making sure that the athletes we serve are protected,supported and empowered in every possible way," said USOC Chairman Larry Probst in a statement ahead of the announcement.

"I’m thrilled that Sarah has accepted the position and thankful to the diverse slate of candidates who participated in our process to hire the very best person for this important responsibility," said Probst.

Hirshland, a graduate of Duke University, will relocate to Colorado Springs and begin work by the end of August.

The USOC chair thanked Susanne Lyons, a member of the USOC board, for her work filling the CEO position on an interim basis.

Wasserman tells Around the Rings he has known Hirshland for many years and calls her "a wonderful hire".

Wasserman and Hirshland will collaborate closely on marketing matters for the Los Angeles Olympics. A marketing agreement and plan is supposed to be developed and adopted by the end of this year between the organizing committee, the USOC and the IOC.

Hirshland’s work at the USGA and Wasserman would seem to be in line with developing an Olympic marketing program for the 2028 Olympics.

Hirshland handles global media and content distribution, corporate partnerships, merchandise and licensing, marketing, communications and community outreach as part of her work for the golf association.

Her duties at Wasserman included the development of sports marketing strategies for clients such as American Express, Nationwide, Nokia, Scotts and Wachovia.

"The Olympic and Paralympic Games, and the movements they help advance, are a source of inspiration and admiration on every continent on earth, and one of the few things in history that can bring the world together in celebration," says Hirshland in a statement.

"To be invited to lead the Olympic and Paralympic community in the United States, to be associated with Team USA, and to have the honor and privilege of serving America’s athletes is anabsolute dream come true," said Hirshland.

"I also recognize the challenges ahead as we navigate this critical moment in the USOC’s history. We must protect, support and empower athletes, young and old, elite and beginner," she said before referencing the sexual abuse issues facing U.S. sport.

"Olympic and Paralympic sport in the United States must be a shining example, able to provide athletes with the benefits of participation in an environment free from abuse of any kind. The USOC has made great strides in this area and I look forward to carrying on that critically important work."

"Sarah has been a wonderfully impactful leader as we have worked to preserve, protect and enhance the game of golf," said Mike Davis, CEO of the United States Golf Association.

"With golf’s return to the Olympics a couple years ago, the game already has a strong working relationship with the USOC and now with Sarah at the helm this connection will only be strengthened," says Davis in the USOC press release.