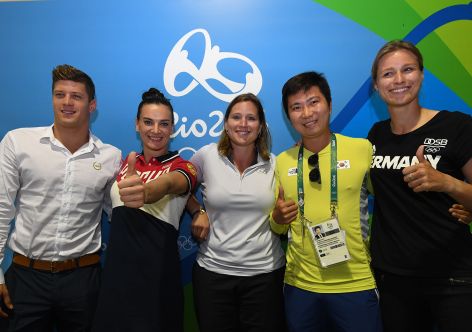 (ATR) IOC president Thomas Bach returns to the Olympic Capital this week as the IOC’s athletes’ commission prepares to meet.

The IOC has 25 commission groups ranging from ethics to sustainability that each contain anywhere from five to upwards of 20 members.

One of the most prominent groups is the athletes’ commission which is scheduled to meet from Nov. 6 through Nov. 11. The dates of the other commission meetings cannot be found on the IOC’s website and the IOC did not reply to a request for details regarding other meetings.

Recently appointed athletes’ commission member Saina Nehwal of India will not be able to attend her first commission meeting as she needs to prepare for badminton tournaments in China and Hong Kong.

The annual New York City Marathon will welcome nearly 20,000 runners throughout the five boroughs of New York when it begins on Nov. 6.

The United States Olympic marathon team will be the Grand Marshals of the event and ride in the lead pace car. The athletes will also participate in the event's opening ceremony and activities throughout the week preceding the race.

U.S. Olympian and Rio 2016 gold medalist in the triathlon Gwen Jorgenson will be competing in the race which will be her first ever marathon. Jorgenson announced her intention to run the NYC Marathon just four days after earning her gold medal in Rio.

She will compete with fellow Rio Olympians who are debuting at the distance, including 5,000-meter runner Kim Conley and 10,000-meter American record holder, Molly Huddle.

"I have always wanted to do a marathon," Jorgensen told Runner’s World. "I have had such a rigid plan these past four years; if it helps me win a gold medal I would do it, if it doesn’t I wouldn’t. Now I am ready for a new challenge."

Professionals in the design, construction, refurbishment and management of major sports venues around the world will convene in Liverpool and Manchester this year for the Stadium Business Designs and Development Summit.

The event will be held at one of the UK's international cricket venues, theEmirates Old Trafford in Manchester.

60 project delegations including sport federations and event bid committees are expected to attend.

The annual conference gives delegates the opportunity to discuss plans for future and current sporting venues through workshops, mini-expos, and networking events.

Speakers for some of the workshops include the Director of AFL-Architects John Roberts, CEO of Cambridge United Community Trust Danny Kerrigan and Chief Executive of Lancashire CCC Daniel Gidney.

The 2016 edition of the conference will feature a "Marketplace" specifically designed open debate and incite interaction through the displays of various product demonstrations.

The Summit will also give delegates the opportunity to take site visits and tours to venues such as Goodison Park and Anfield Stadium in Liverpool.

The Stadium Business Designs and Development Summit will take place from Oct. 31 to Nov. 2.

The historic World Series showdown between the Chicago Cubs and the Cleveland Indians will end this week with one team bringing home their first championship in several decades.

Game six of the seven game series will be played on Tuesday, Nov. 1 and a game seven will take place on Nov. 2 if necessary.