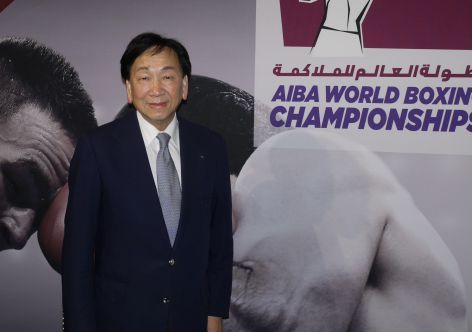 (ATR) The Executive Committee of Olympic boxing federation AIBA meets in Dubai Nov. 3 and 4 to begin sorting the leadership crisis that has struck since July. President CK Wu was suspended by the federation disciplinary commission earlier this month and will not attend the meeting.

The EC meeting is the first since one held in Moscow in late July when a majority of the committee backed a resolution seeking a vote of no-confidence against Wu. The EC believes that the federation is on the verge of financial collapse due to mismanagement by Wu, AIBA president since 2006.

At the Dubai meeting, the EC will address the financial questions that have arisen. Plans for an extraordinary Congress in January may also be advanced. While Wu is suspended from office, he can only be removed by vote of a Federation Congress. Wu has but 12 months left in his third term as president.

The IAAF announced on Wednesday the panel of experts who will select the Best Athletics Photograph of the Year at next month’s IAAF Athletics Awards 2017.

The group of five includes two professional photographers. David Burnett has covered all the Summer Olympic Games since 1984 as part of a career that has spanned some 50 years. Rafael Segui has been plying his craft as a photojournalist since 1965 and worked with the IAAF from 1997 to 2015.

Raquel Nunes has been the IAAF Photo Commissioner since 2013 and a member of the IAAF Media Advisory Group since 2015. She was the Venue Press and Photo Operations Manager at Rio 2016.

The one former athlete in the group is Dwight Phillips of the United States. Besides winning four IAAF World Championships and an Olympic title in 2004 in the long jump, Phillips is also a keen photographer.

The panel will first select a shortlist of 25 images before choosing the top three by Nov. 15. The finalists will be invited to the IAAF Athletics Awards with the winner being revealed live on stage on Nov. 24.

Gambian sports leader and IOC member Beatrice Allen is one of four new members of the World Baseball Softball Confederation Executive Board.

The appointment of Allen as a vice president this week means that four of the 13 members (31 percent) of the WBSC Executive Board are women. IOC guidelines set a target of at least 20 percent of decision-making positions be occupied by women.

"The WBSC is honored and excited to welcome an experienced and distinguished world sports leader like Beatrice Allen as new WBSC Vice President," said WBSC President Riccardo Fraccari in a statement. "Her knowledge and expertise -- from world issues like women in sport and diplomacy to development in Africa -- will be a major asset to the WBSC Executive Board and our federation as a whole."

Allen helped introduce softball in Gambia and spearheaded the establishment of the Gambia Softball Association, where she served as president and remains honorary president.

"WBSC under President Fraccari is very serious about baseball and softball's international expansion and about the role women can and must play if the vision is to be realized," Allen said in a statement.

The first meeting of the new WBSC Executive Board has been tentatively scheduled for March 2018 in Paris.

ITTF Fines Top Three Players for Skipping Out on Tournament

The International Table Tennis Federation is fining the top three players in the world $20,000 each for not showing up for their round of 16 matches at a tournament in June.

China’s Ma Long, Fan Zhendong and Xu Xin forfeited their matches at the 2017 ITTF World Tour Platinum China Open but a federation disciplinary panel found them guilty of withdrawing for reasons other than illness or injury and called for a one month suspension.

Following explanations from the players and assurances from both the players and the Chinese Table Tennis Association (CTTA) that it wouldn’t happen again, a fine was imposed rather than a suspension.

Since the players did not appeal, the decision took effect immediately with the ITTF saying it was looking forward to welcoming them back and "for the three icons of the sport to be role models for millions of table tennis players across the world".

Written and Reported by Ed Hula and Gerard Farek