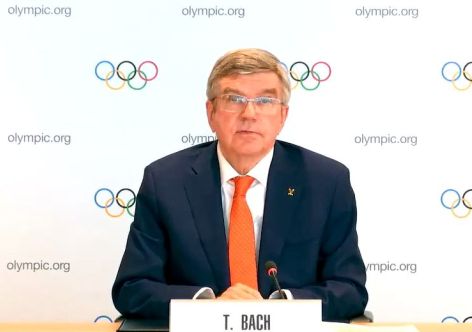 (ATR) Plans for IOC President Thomas Bach to visit Japan appear to be shelved as Tokyo keeps extending a state of emergency to counter the spread of coronavirus.

Bach was making plans to be in Japan for the May 17 Olympic torch relay celebration in Hiroshima. Along with Nagasaki, the two are the only cities where nuclear weapons have been deployed in war. In addition to the event, Bach had been planning to meet with Prime Minister Suga Yoshihide and other top officials.

The visit would be his second to Japan since the pandemic struck. The first, last November, was limited to Tokyo meetings and a tour including the newly constructed National Stadium, venue for opening ceremony and athletics.

While the IOC has yet to confirm, Tokyo 2020 President Hashimoto Seiko said a Bach visit at this time would be "difficult".

"Frankly speaking, personally I think it would be quite tough for him to come now," Hashimoto said during her weekly Friday news briefing.

"With current situation, for President Bach to see directly with his own eyes, on one hand that is important, but the extension of the state of emergency and having him visit during that time will mean President Bach will be visiting during quite difficult timing. I think that will a very difficult thing for him as well," she said.

The IOC is now working on a plan to implement the donation of COVID-19 vaccine by Pfizer and BioNTech that will be administered to athletes ahead of the Tokyo Olympics.

The donation was announced May 6, but the number of doses and how they will be distributed was not disclosed.

The IOC has said that vaccination will not be required for athletes to compete in Tokyo. Previous estimates have indicated that 60 percent of athletes could be inoculated before the Games.

"We have been preparing for the Games without assuming the participants will be vaccinated, but if more people are vaccinated that means we are making a step forward to further enhance the safety and security of the Games," she said.

Canadian National Olympic Committee CEO and secretary general David Shoemaker said the donation will be important for his team headed to Tokyo.

"This will add an important layer of protection for Canadian athletes. We look forward to working with the IOC, Pfizer/BioNTech and government agencies for next steps," he said via Twitter.

CONI, the NOC for Italy, said in a statement to Around the Rings that the donation won’t be needed as the government is already administering the Pfizer vaccine to athletes.

It’s the same situation in Austria says NOC president and IOC member Karl Stoess. He says the government is distributing the one-dose Johnson and Johnson vaccine for Austrian Olympians. He expects as many as 90 percent of the delegation will be vaccinated for Tokyo.

"We do believe, the IOC offer is primarily targeting all regions, where vaccinations are currently rare or impossible to get," he says.

Trinidad and Tobago could be one of those. NOC president Brian Lewis tells ATR Pfizer is not available in his country. Now he waits for details on whether the vaccine will arrive in time.

Mennel points out that regardless of the generosity of Pfizer and BioNTech, the shots must be administered soon to be of value, especially since two inoculations are needed, weeks apart.

"The time slots for athletes are quite narrow as the summer season in all of the Olympic sports is quickly approaching. There are still a number of qualification competitions scheduled and it’s only less than two months until the final Olympic Teams need to be nominated," says the Austrian NOC secretary general.