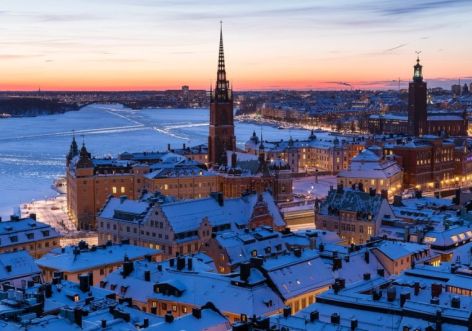 The Swedish ski resort of Åre will proceed with plans for future expansion despite a losing bid to host the 2026 Olympic Winter Games.

It will also move forward with plans to construct the Olympic Village proposed in the Stockholm- Åre 2026 masterplan, albeit under a different name.

Are resort general manager Niclas Sjogren Berg tells Around the Rings that while the loss to Milan-Cortina on June 24 was disappointing, it was "actually not that difficult" and "the future is still bright for Åre."

"The Olympics for us has never been a goal by itself – we have a common vision to create the most memorable holiday destination and the Olympics was just a goal on the way to reach it," Berg said.

"What we had to do for the Olympics, we will still do.

"We have tried for the Olympics before and we have seen that Åre is stronger than that – it’s just a matter of speeding things up if you get the Olympics."

Berg informs that the Olympic Village housing project is still in place and will provide an estimated 1,700 beds, necessary accommodations for skiers and guests at the rapidly expanding lakeside resort in Sweden’s Jämtland County.

"We will still build the Olympic village in Rodkullen, of course there will be some other name," Berg noted. "Maybe not finished in 2026, but maybe for 2027.

"If you stay there as an athlete or as a guest you can just put on skis and ski down to the arena where the competition will be held or go up on the mountain."

Åre is the largest of six resorts in the SkiStar AB group, which Swedish NOC president Mats Arjes led as chief executive officer before recently stepping down. Arjes, also the president of the Swedish Ski Federation from 2008-2018, assumed leadership of the Swedish NOC in April 2018. He stressed that his top priority was to bring the Winter Olympic and Paralympic Games to Sweden for the first time in the country’s history.

The Swedish mountain resort hosted the two-week FIS Alpine Ski World Championships in February and was mapped for skiing and snowboarding events if Sweden would have succeeded in its quest to host the Games.

Berg said Åre will continue to be a regular tour stop on the ladies World Cup. The Swedish ski area is contracted for at least three more seasons on the FIS schedule.

According to Berg, Åre will also pursue additional international freestyle skiing and snowboarding events at a newer venue in nearby Duved. Previously, it has been the site of FIS World Cup moguls events.

"We knew we had to be finished there in 2025, now it may take some more time, but the plans are still there."

Berg said Arjes – whom he worked alongside during time together at SkiStar and with preparing the Stockholm- Åre bid – is the right person to lead the Swedish NOC into the future.

"Mats is really interested in seeing how Sweden can be better on all levels, not only sports, and he has a long reputation with the Swedish Ski Federation and has the right international contacts, so I think he is the perfect man in the perfect place," Berg said.

Pertaining to potential future Olympic bids, Berg said that Åre must always be ready as the only ski area in Sweden that has the required vertical capacity to stage intricate Olympic downhill races.

"We should be ready when we get the question, of course we are interested in the future, but it has to be a bid that we can see that we can win," he said. "If they decide, we are ready – no problem for us."

Written and reported by Brian Pinelli.