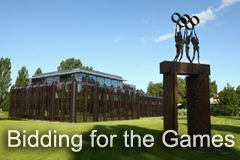 "There probably will be a bid from Istanbul," Turkish Olympic Committee president and IOC member Urgur Erdener tells ATR at the IOC Session in Durban.

"When I return to Istanbul, we will have a meeting with the government to discuss the bid and possibly make an announcement by the end of the month," Erdener says.

The recent naming of a new sports minister was one of the final pieces that needed to fall into place before the bid plans could be finalized, Erdener says.

"We still have some issues, such as finance, the guarantees, but our economy is good," he adds.

Istanbul has bid four times for the Games: 2000, 2004, 2008 and 2012, never coming close to selection. Erdener says since those bids, Istanbul has built an Olympic Park and other venues to support a Games.

Spanish IOC member Juan Antonio Samaranch tells ATR that Madrid could launch plans for a 2020 bid within the next two weeks.

The Spanish Olympic Committee executive board meets July 20 and is expected to consider endorsing a new bid for the Games then. Newly re-elected mayor Alberto Ruiz Gallardon is now conducting meetings with stakeholders to assess support for a third bid.

Japanese Olympic Committee president Tsunekazu Takeda tells Around the Rings that while the JOC is in favor of a 2020 bid, it’s up to the Tokyo Metropolitan Government to move the project forward.

He acknowledges that Wednesday’s victory of PyeongChang for the 2018 Winter Olympics is one of the factors that will go into a decision.

"We have to consider this, we have to discuss at the Japanese Olympic Committee. Will we have a big possibility for 2020? This is something we must discuss," he says.

The possibility of a Japanese bid for 2020 is likely to get plenty of attention next week when IOC president Jacques Rogge and other Olympic dignitaries visit Tokyo to celebrate the 100th anniversary of the JOC.

Rome is the only city to have the endorsement of its national Olympic committee to bid for 2020.

Ernesto Albanese, CEO for the bid, is in Durban where he is observing the IOC Session. He’s joined by staff from the Italian NOC and the office of the mayor of Rome.

Despite the South African government dropping plans to bid for the 2020 Games, "all doors are open" insists sports minister Fikile Mbalula.

"The possibilities are there and from the sports ministry and the sports fraternity in SA, we have always said that we are quite keen to reopen talks on this matter," Mbalula said during the Durban IOC Session.

Following Annecy’s ignominious loss at the IOC Session in the race for the 2018 Winter Games, there is no interest in a bid from Paris for the 2020 Olympics. Newspaper L’Equipe says French leaders are leaning towards a bid for the 2024 Games, the centennial of the 1924 Paris Olympics.

Busan, South Korea is also signaling that it will drop any immediate plans to launch a bid from the country’s second-largest city.

And while the USOC and IOC continued to make progress this week towards a new revenue sharing agreement considered necessary before launching a new Olympic bid, it’s not likely to happen before the Sept. 1 deadline to submit a candidate to the IOC. Even if a new deal is reached in time, the U.S. does not have a candidate ready to go. By the way, Jon Killoran, a leader in efforts to bring the 2022 Winter Games to Reno, Nevada, is in Durban as an observer. He’s accompanied by adviser Jack Kelly.

Written and reported in Durban by Ed Hula.