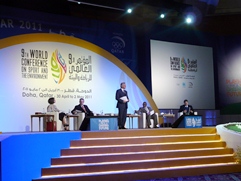 ATR's Coverage of the

Sport and Environment in Doha

is Proudly Sponsored by

About 500 delegates from 80 nations are in Doha for this ninth edition of the IOC World Conference on Sport and the Environment.

Speaking at the opening of the meeting, IOC President Jacques Rogge declared that respect for the environment is now an "Olympic obligation" that has now moved beyond simple awareness of the need to think green.

"We must be sure that our own activities do not contribute to environmental degradation," said Rogge.

"At the same time we must use sport as a tool to encourage environmentally responsible behavior by us," he said.

"Playing for a Greener Future" is the theme for this two-day conference which is supposed to examine new approaches and opportunities for sport to contribute to sustainable development. The biennial conference was last held in 2010 in Vancouver.

"We are not winning the battle for sustainability," warned Achim Steiner, executive director of the U.N. Environmental Program, urging the continued support of the IOC, especially towards the Rio 2012 environmental summit.

"Don’t underestimate the smallest steps," counseled Sue Riddlestone of London-based BioRegional, which was an advisor to London 2012 in the formation of its sustainability program during the bid phase. London 2012 sustainability director David Stubbs is one of the speakers at the conference as well.

The conference is led by IOC member Pal Schmitt, who has chaired the IOC Commission on Sport and the Environment since it was formed in 1994. Schmitt says he considers this work on the IOC of "great importance" – and remains committed to this mission, despite the demands of his time now required as President of Hungary, a post he took last year.

Nearly two dozen IOC members are in Doha for the conference, a number of them members of the Sport and Environment Commission.

Also in Doha, are the three 2018 WinterOlympic bids, observing, as well as lobbying the plethora of IOC voters at the meeting. Annecy and Munich outflank PyeongChang with the largest teams of observers. Alone among the bids, Munich held briefings for regional media on its environmental program, titled "Flagship 2018", which appropriately enough carries an 18-point plan of action if the Bavarian capital wins the race.

Hambantota, bidding for the 2018 Commonwealth Games also has bid officials present, including Sri Lanka Minister for Mass Media and Information Keheliya Rambukwella. The Hambantota bid is highlighting the Commonwealth Games as an event that will drive sustainable development in a small city. Gold Coast in Queensland, Australia is the other bidder in the race to be decided in November.

For Qatar, the conference is the latest manifestation of the country’s rise as a host for major sport events. From the 2006 Asian Games, Qatar now has the task of organizing the 2022 World Cup, an event which will require high attention to environmental issues. A session Monday is devoted to the challenges ahead for Qatar, an arid land with a population of just over one million.

Written and reported in Doha by Ed Hula.