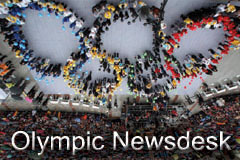 The IOC apparently hopes to have the "Osaka Rule" back on the books in 2013 following a Court of Arbitration for Sport decision invalidating the rule.

"This is not a defeat," IOC Juridical Commission chairThomas Bach told The Associated Press following Thursday's ruling from CAS.

Olympic champion LaShawn Merritt appealed the rule barring athletes from the next Olympics if handed a doping ban of more than six months. CAS said the rule is "invalid and unenforceable" and does not comply with the World Anti-Doping Agency’s Code. The ruling cleared Merritt to compete in the 2012 Olympics. In a statement, Merritt said he hopes to defend his 400m gold next year.

Bach, however, said the IOC would push WADA to add the rule to the Code, which will be reviewed in 2013.

"We'll try to convince all the stakeholders in WADA to adopt the rule which supports our aim," he said.

"We have taken a position on moral grounds and we will try to make this moral decision also apply on the legal side."

The Coordination Commission for the 2014 Commonwealth Games in Glasgow say plans are progressing as they should.

"The project is on course. There are no ‘red flags,’"Co-Comm chair Bruce Robertson said during Thursday's closing press conference.

"We are satisfied with progress including the great strength of partnership, progress on planning and delivery of the major infrastructure elements such as the Athletes’ Village and the sports venues, and the clear focus on generating value and legacy for the people of Glasgow and Scotland."

Robertson did warn Games organizers that now is not the time to grow complacent.

"2014 may seem a long way off, but the level of activity typically accelerates at this stage of a Games project and we all need to shift into the next gear to keep pace," he said.

Robertson added that the Commonwealth Games Federation will look to see that Glasgow 2014 has hired more staff and venues are Games-ready the next time he inspects the city’s work in April.

David Grevemberg, Glasgow 2014 CEO, said: "We are on track and on budget and we’re absolutely delighted to show the Coordination Commission members our progress, as well as discuss the pathway ahead of us. We have achieved a great deal to date, we have a great team and we are confident we will deliver an outstanding Games."

The CGF will make six Co-Comm visits to Glasgow before the Games. This four-day trip was its first.

Coca-Cola is under fire for its Olympic plans.

While LOCOG is telling spectators to take public transportation during Games next year, organizers set aside "Olympic lanes" dedicated for the Olympic Family, including sponsors.

"When the Olympics bid was accepted, part of the deal was that there would be dedicated Olympic lanes for competitors and, unfortunately, the sponsors, so it will be Coca-Cola executives. That will be annoying. Hopefully therest won't grind to a halt," Transport secretary Philip Hammond was quoted by London’s Evening Standard newspaper.

Tony Travers, a transport expert at the London School of Economics, also critiqued the decision to allow Coca-Cola staff and guests to ride by car.

"Coca-Cola will benefit from special measures during Games where traffic will be an issue like no other and the rest of us are being asked to make sacrifices. It is a blatant affront to the Olympic spirit," he said.

According to the Standard, the company’s staff is staying a short distance from Olympic Park and could easily take public transportation to the competitions.

Paralympic sport is getting a boost in Zambia

A statement from the International Paralympic Committee heralds the opening of its Regional Development Camp in Lusaka.

"The government wants access to sports facilities to be user-friendly for all," he said at Monday's ceremony.

"All public infrastructure must be accessible to people with a disability. We need to accommodate everybody.

"My message to participating countries is that the skills and knowledge from this camp are used to enhance sports for persons with a disability. I’m sure this will change the way disability sport is run in the whole region."

The camp runs through Saturday and is sponsored by the Norwegian Olympic and Paralympic Committee and Confederation of Sports and Charity and Sport.

"It’s also a chance for countries to exchange best practices and programs in order to learn from each other."