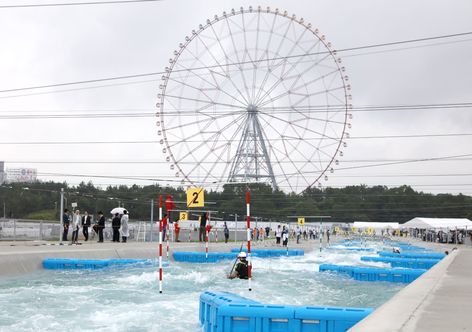 Tokyo Forges Ahead with Olympic Construction

Only the Olympic Stadium, Ariake Arena for volleyball and the aquatics center have still to be completed, according to Tokyo 2020 organisers.

Tokyo marks the one-year countdown to the Games on July 24.

Constructed by the Tokyo Metropolitan Government, Kasai Canoe Slalom Centre is the first manmade course for the sport in Japan.

(ATR) Pick up a phone or log onto a website beginning today to purchase tickets for the Tokyo 2020 Olympics.

CoSport, the U.S.- based firm which handles ticket sales in the world’s largest markets, will be open for live orders July 9 for U.S. customers.

Australian sales will begin July 10 at 9am.

CoSport is one of a number of authorized ticket resellers around the globe who are chosen by each NOC.

In Australia, CoSport says over one million users have accessed the website to participate in the first phase of selection.

(ATR) An IOC delegation will hold its first major meeting with 2026 Winter Olympic officials in Milan on Thursday.

The IOC tells Around the Rings that Thursday’s meeting will set the tone of a new strategy to work more collaboratively with hosts from the moment the Olympics are won.

"Following the recommendations and measures of Olympic Agenda 2020 and the New Norm, the IOC now starts working with Games hosts from the very early stages of their lifecycle in order to maximise collaboration opportunities," an IOC spokesperson told ATR.

The Swedish ski resort of Åre will proceed with plans for future expansion despite a losing bid to host the 2026 Olympic Winter Games.

It will also move forward with plans to construct the Olympic Village proposed in the Stockholm- Åre 2026 masterplan, albeit under a different name.

Are resort general manager Niclas Sjogren Berg tells Around the Rings that while the loss to Milan-Cortina on June 24 was disappointing, it was "actually not that difficult" and "the future is still bright for Åre."

"The Olympics for us has never been a goal by itself – we have a common vision to create the most memorable holiday destination and the Olympics was just a goal on the way to reach it," Berg said.

"What we had to do for the Olympics, we will still do."