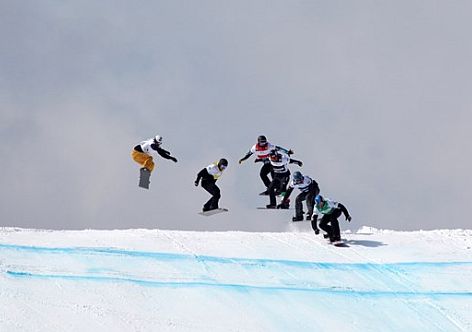 Eight events were contested at the future Olympic venue during two sessions of FIS World Cup events, which doubled as Olympic test events.

"It was a pretty good stress test for the organizing committee and also the relationships between the Korean Ski Association and POCOG," said FIS freestyle skiing events coordinator Joe Fitzgerald.

"I think we along with the (course) design firms pretty much hit a homerun," Fitzgerald said noting that athlete feedback was positive.

The future Olympic freestyle skiing and snowboard courses, which are located at the Bokwang Phoenix Park resort approximately 30-kilometers from the Alpensia mountain cluster village, were only completed in November 2015.

"This venue kicks a**," Holland said. "The slope is perfect, the jumps were big and there are some tactics and strategy involved. I like courses that are big and wide open with strategy—it makes you think a little more versus a whole-shot scenario. And I’m stoked to see that this hill has the DNA of tactics, big jumps and fast speeds."

"The course was very fun and there was a lot of action going on," Trespeuch said. "It was amazing."

Freestyle skiers raced down parts of the same 1,300-meter cross course. To ensure that the course caters to the needs of both skiers and snowboarders, the course splits after about 20% of the slope with the snowboarders taking another route, and then rejoining the skiers after about 60% with the two disciplines sharing a common finish area.

"The cross course was a so-called big course with lots of large features and big jumps," Fitzgerald said. "It took a little bit of time to ensure that that course worked out since we have some 15 to 20% differences in speed between the male skiers and the female snowboarders.

"We also had some weather to deal with, which was a good test for both the course and the organizers because they had to do lots of special preparations to clean everything up," said the Canadian freestyle events chief.

The 617-meter slopestyle course featured three jumps and three rails. The course was designed by German course builders Schneestern, famous for their terrain parks at Montafon, the Stubai Glacier and various other locations across Europe.

"We wanted to make sure that we presented some new things in slopestyle, which was very well achieved by the design company who created extremely innovative features on the course and some that I've actually never been seen before," Fitzgerald said.

"This slopestyle course is unreal," Furrer said. "There are so many options and transitions. There will be so many different runs thanks to the course design, which has made slopestyle cool again."

A better than expected crowd attended the events cheering for the skiers and boarders as "Hello PyeongChang!" boards and banners adorned the venue.

Fitzgerald said that appropriate modifications will be made and the courses will be improved in the lead-up to February 2018.

"There are some takeaways and some refinements that the design company has noted along with us and also with feedback from the coaches and the teams and this will be built into with course coming into the Olympics in 2018."