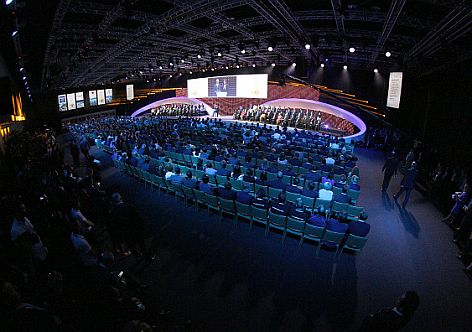 KUALA LUMPUR, MALAYSIA - JULY 31: General view of the Ceremony Hall during the Announcement Ceremony of the host city of the 2022 Winter Olympic Games at the 128th IOC Session at the Kuala Lumpur Convention Centre on July 30, 2015 in Kuala Lumpur, Malaysia. (Photo by Stanley Chou/Getty Images)

(ATR) For the first time since going to electronic voting more than 10 years ago, the IOC encounters a glitch.

It happened just as IOC members had cast their votes for 2022 Winter Olympic race between Almaty and Beijing.

Vote scrutineers decided that something was amiss with the voting and consulted with IOC Director General Christophe de Kepper, who supervises the voting.

De Kepper blamed the glitch on "interferences with the changes of tablets."

"Scrutineers are not comfortable with the integrity of the vote," he said.

Bach said he agreed in order to protect the integrity of the vote.

"I think this speaks for itself for a very fair election in everybody’s interest," Bach said later at a press conference.

Shortly before the 2022 vote, IOC members used the electronic voting system to elect Lausanne over Brasov, Romania, 71 to 10 for the 2020 Winter Youth Olympic Games. Although some malfunctioning tablets needed to be replaced for that vote, there were no further incidents.

But less than 30 minutes later, technical problems arose with the 2022 Olympics vote. Around 15 tablets were replaced, the IOC told ATR.

One IOC member told ATR he had heard the vote was tied when the revote was called, although the IOC said it would have been nearly impossible for him to come to that conclusion.

Bach dismissed any suggestion of irregularities with the vote.

He said scrutineers decided to be "on the very safe side" and hold a new vote on a paper ballot.

After the vote, Almaty 2022 bid vice-chairman Andrey Kryukov told reporters he was not aware of any electronic voting problems that could have affected the final result.

"I don’t know what happened inside the room. Anyway, this result was

Electronic voting is expected to be used again at the session with the election of new members and other decisions requiring a ballot.

​20 Years at #1: Your best source of news about the Olympics is AroundTheRings.com, forsubscribers only.