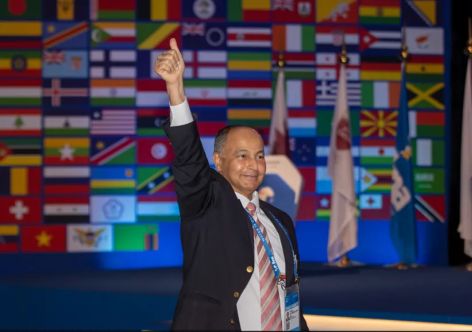 "I can tell you FINA will change its communication with all journalists and FINA will move forward to be more transparent in every area and every work of FINA," Al Musallam informed journalists.

Al-Musallam, 61, makes the step up from FINA vice president having served under former president Julio Maglione. The Kuwaiti-born Aquatics president – who ran unopposed and was elected at a general congress in Doha on June 5 – brings a wealth of experience within the federation having been elected to the FINA Bureau in 1996.

He addressed media for nearly 40 minutes spanning a wide array of topics and issues during a virtual news conference on Thursday.

Al Musallam vows closer communication and cooperation with the sport’s athletes, as well as organizers of events, including the International Swimming League (ISL), despite a pending lawsuit between the two bodies.

"My policy and goal is to be open to ISL or any other commercial operator – our door is open," he said, noting personal meetings with ISL in 2019 and in 2021 via Zoom.

"If any entity would like to play a positive role and help the movement, I’m the first one to congratulate them and shake their hand."

Al Musallam said he fully supports the decision of the Court of Arbitration of Sport (CAS) to ban Chinese swimmer Sun Yang for more than four years for acting recklessly and violating anti-doping rules. The court's verdict following a retrial ends Sun's chance of defending his Olympic title in the 200-meter freestyle in Tokyo next month.

"FINA will always be part of and support clean sport on all levels in every discipline," Al Musallam tells Around the Rings. "The reports which I announced in Doha, part of it is the response concerning the anti-doping.

"We are committed to do further reports and it is not because we are not doing enough, but it is time to review and ensure every person, in the swimming pool or outside the swimming pool, thinks very transparent."

During the call, Al Musallam introduced FINA’s new executive director, Brent Nowicki, a U.S. attorney who arrives at the federation from CAS, where he served as the head of its anti-doping division for Rio 2016 and PyeongChang 2018.

"Brent will add value because he is in charge of the reports for the athletes within CAS and especially the anti-doping," Al Musallam says. "When I chose Brent, I didn’t know him, but I knew that we need someone to help this organization to move forward in the future."

Al Musallam looks forward to the Tokyo Games, where the Aquatics federation will award 49 sets of medals among its five disciplines, currently one more than Athletics. He says he is not concerned about swimmer’s performances suffering due to all finals being scheduled for morning sessions, a move to appease U.S. broadcaster NBC.

"I don’t think it will affect (swimmers) – we have a very good example at Beijing Games 2008 as a fantastic world record was achieved in the morning," Al Musallam notes. "At the Tokyo Games, I will expect some world record will be achieved."

The Kuwaiti sports leader said he is proud that FINA will offer more medals than any other IF at the Games.

"I’m glad to have 49 medal events and maybe we will have more, hopefully, because we will demonstrate that we can deliver the best moments, the best show and the best family endeavor, all of us in one boat to serve Aquatics from the athletes level to the president of FINA," he said.

Al Musallam also noted that he we will fight for and would like to see a mixed-gender artistic swimming event at future Olympic Games, an event that already exists within the FINA program.

Complimenting the competitive aspect of swimming, Al Musallam believes that the sport continues to develop as a recreational activity worldwide providing immense benefits for participants of all ages.

"We have such a beautiful sport – our sport starts from the kids level going into the water to the high-performance elite until the age of 90 with our seniors, so we have a healthy sport and everybody is happy to see this," he said.

Taking Water Polo to the Next Level

Al Musallam assures that he will place significant emphasis on growing and developing water polo, a sport with a storied history and tradition, yet one that was rumored to be in jeopardy of being dropped from the Olympic program not too long ago.

"It is a fantastic sport, a very old sport at the Olympic Games, and it is popular now in Europe and starting to be around the world," Al Musallam said. "There is room for development."

In 2018, FINA held the World Water Polo Conference in Budapest to explore best ways to innovate and boost the sport’s global popularity and footprint.

"The rules were improved after the Budapest conference, but we need to do more," the FINA president said.

"Tomorrow, I’m going to the men’s Water Polo Super Final in Tbilisi, Georgia and I will meet again with all athletes and coaches and I will listen to them.

"I will also pay attention to the sport at the recreational level to the development level. When I say recreation level, I mean in Africa, parts of Asia and Oceania, and in the Caribbean and Latin America.

"I want to make this sport known all over the world and closer to the kids. You don’t have to rent a swimming pool – I will start on the beach, the river or the lake, in Africa.

"I talked to the women’s water polo team from the USA, they have been champions for a long time, and asked them will you help us to go to Africa, one of you with a coach and show the kids how to enjoy the sport in a lake and they said ‘we would love it,’" he said.

"I’m also working on a new project with beach water polo and I’m sure there will be a lot of countries that will join this sport and FINA can help play a part.

"Within four years you will see water polo improved at the elite level, improved on the development level and spreading around the world to new countries," the FINA president promised.