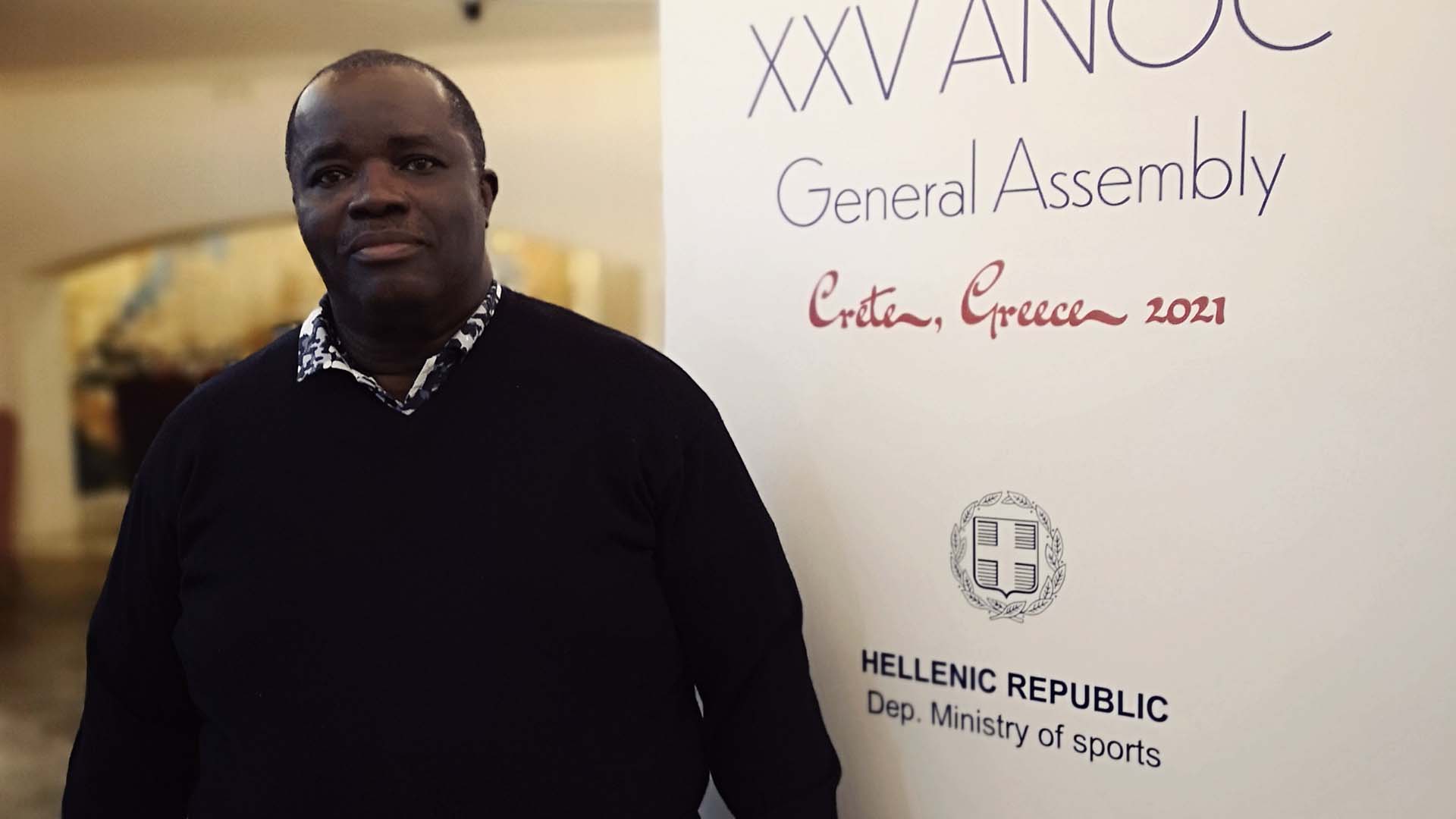 CRETE (GREECE) - The Francophone Association of National Olympic Committees (AFCNO) came out of the last Tokyo Olympics satisfied with its sporting performance (96 medals, according to its own figures) and with an imminent objective: to redefine the role of the French language within the Olympic movement.

And that is what Gilles Gilbert Gresenguet, president of the Olympic Committee of the Central African Republic, intends to do if he is elected new president of the organization that was born in 2010 to promote the use of French and the French language in sports.

The elections take place next November 18, and Abakar Djermah Aumi, president of the Chad Olympic Committee, is also aiming to win them.

“Whoever wins, we must understand each other because we have common goals and we should also share a common vision,” says Gresenguet in an interview with Around the Rings.

He does so on the Greek island of Crete, the venue these days of the General Assembly of the Association of National Olympic Committees (ANOC) and the ideal setting for the culmination of an election campaign involving the 47 member countries of the AFCNO.

- What is your proposal for the AFCNO of the future?

One of my main objectives is to recover the use of French not only in the African Games, but also in the Olympic Games. It was the pioneer language and, unfortunately, it is being lost in favor of English.

- To what do you attribute this?

- But here we are talking about sports.

Yes, but the Games are highly politicized. And we should manage to bring them back to the sporting and cultural arena. In Africa, we have already taken steps in that direction.

- The Games, in fact, were born in French.

That’s right. And we should honor Pierre de Coubertin’s legacy and expand it, especially since Paris, the great French-speaking reference, will host the next Olympic Games. That should help us in the fight for the Games to speak French again. We have to take advantage of Paris 2024. 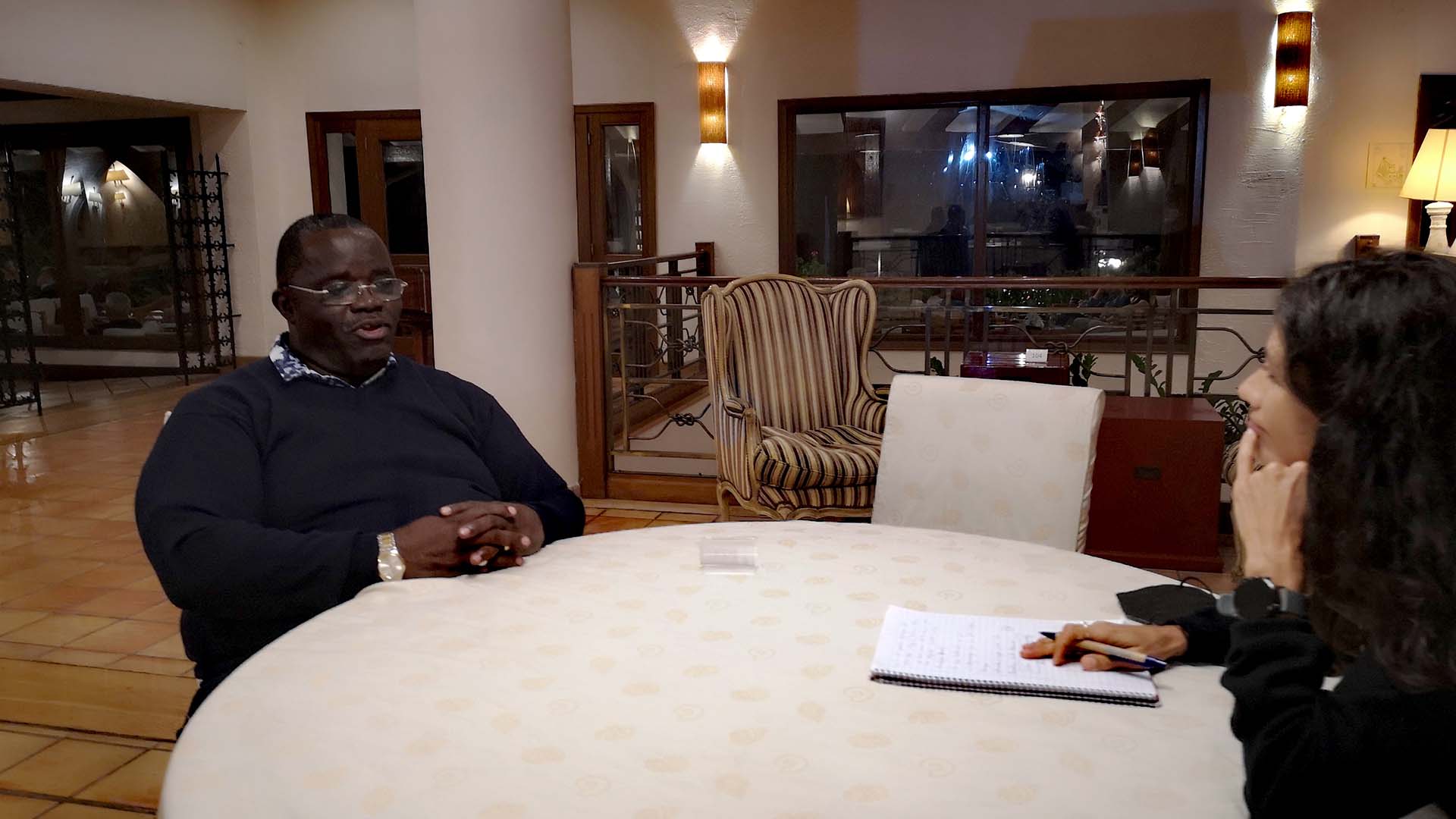 Gilles Gilbert Gresenguet, during the interview in Crete with Around the Rings

- What other goals do you have in your program?

To give the AFCNO more visibility. Also, and very importantly, to facilitate exchanges between the French-speaking countries of the North and the South.

In the sporting and economic sense, that is to say, that there be an exchange that will allow our athletes to be better prepared for the upcoming challenges. The first challenge is the Francophonie Games, which will be held in Kinshasa (Democratic Republic of Congo) in the summer of 2022. The second is the Paris 2024 Olympic Games which, as I said, must be a reference for us.

- Is there no such exchange at the moment?

Some of our athletes go to train in northern countries; in the case of my country, the Central African Republic, to France. But what often happens is that these athletes do not return, they stay in the host countries and are athletes that Africa loses.

- How can this situation be reversed?

It is not easy. Indeed, our athletes leave because we don’t have the money, and that forces us to think about it.

We have to consider the way in which an athlete from one country is now allowed to represent a different country in the Games. It is clear that the one we have now is detrimental to Africa, which has many athletes scattered around the world competing for and for countries that are not African. And I insist that it is not easy, because I am aware that athletes are free. But we have to find a formula that does not harm us so much.

- What will happen if Abakar Djermah Aumi wins the election and you lose?

I don’t see this election as a competition in which there will be a winner and a loser. I think that, whoever wins, we should understand each other because we have common goals and we should also share a common vision.

- Do you have the support of the French, Belgian or Canadian Olympic Committees, to name a few of the French-speaking countries in the North?

I have spoken with many African colleagues and, these days, here in Crete, I will take the opportunity to do so also with representatives of those countries you mention. I do not yet know what support I am counting on. We will know that after the elections.

- Turning back to Africa, what do you think the continent’s role in the Olympic movement should be?

It should have much more weight. And, one day, it should be able to organize an Olympic Games, as it has already organized a World Cup [in 2010].

- Which countries do you see as possible organizers?

- Could you put a date on that day?

I am always optimistic. I think the sun always ends up shining in the dark and that we have to dream of the goals that one day we can achieve.

Pandemic effects and challenges for Olympic Committees, at the center of ANOC General Assembly this weekend