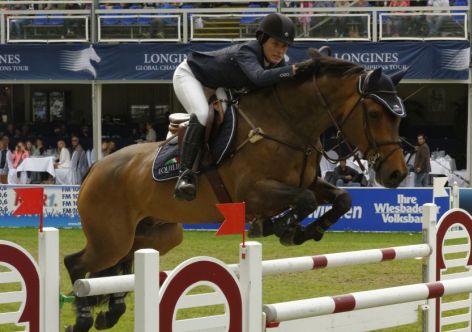 Springsteen, 29, has been named by U.S. Equestrian as one of four members to represent the U.S. squad in jumping at the Games. The only daughter of Bruce and wife Patti Scialfa, also a longtime member of the legendary E Street Band, is currently the number three ranked show jumper in the U.S.

Amid their busy schedule of tours and performances over recent years, Springsteen and his wife have often attended Jessica’s competitions. However, considering the strict countermeasures being implemented by Tokyo 2020 preventing family members from attending the Games, it appears unlikely that the famed musicians will be headed to Tokyo.

"Sometimes, events would line up with their tour destinations and if they had a few days off, they would come," Jessica Springsteen told the New York Times in Dec. 2018. "We were once competing in Madrid, and by chance they had a huge concert there, so we all went," she said, referring to her fellow riders.

And what advice, if any, might "The Boss", as his devoted fans often refer to the music icon, have to offer to his daughter when it comes to competition?

"I think some people can feel pressure from their parents, but they’re just so supportive," she said. "I think he’s grown to love show jumping – as nerve-racking as the sport can be, he actually finds it really relaxing," she said, of her father Bruce.

"He loves to come and watch. It’s fun for him, and my mom is so into it as well."

She recently competed at an event in Windsor, England, finishing third while riding Hungry Heart, a nine-year-old horse named after her father’s 1980 hit single.

Jessica began riding horses at age four on the Springsteen farm in Colts Neck, New Jersey and has ascended the international ranks of the sport for more than a decade. She was an alternate rider for London 2012 and then failed to make the short list for Rio 2016.

"Jessica has that American flair, but she has adopted a lot of the European ways as well. She’s an all-around top-class rider — good eye, good feel and a great understanding of the horse," Breen told the New York Times.

Springsteen will be accompanied in Tokyo by veteran U.S. teammates Kent Harrington, Laura Kraut and McLain Ward, who have previously competed at a combined seven Olympic Games. All team nominations are subject to United States Olympic & Paralympic Committee approval.

The future Olympian from New Jersey is expected to compete in both the team jumping event (August 4), and the individual event (August 7) at Tokyo’s Equestrian Park.

"Representing my country and competing in team competitions is so important to me," Springsteen said

The U.S. has medaled in the team jumping event at six of the last nine Olympics, including winner silver in Rio 2016, runner-up to France.