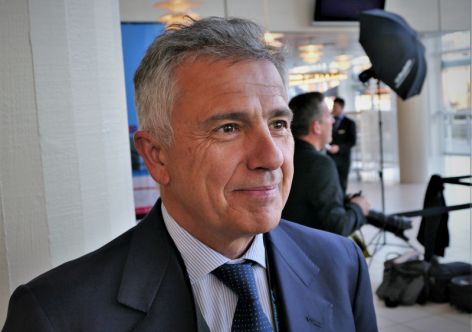 (ATR) Olympic analysts have written the name of Juan Antonio Samaranch Salisachs among the potential successors to Thomas Bach when the German Olympic champion leaves office in 2025.

Samaranch Jr. did not deny his presidential aspiration in an interview with the Spanish radio station COPE.

He was asked last week if he would be the President of the IOC.

"I want to make a reservation before answering that question: I am not a Vice President," said Samaranch.

The Olympic leader recalled that he spent eight years on the Executive Board - the last four, as Vice President - and that now he is required to wait two years before running for the EB again.

When asked again if he was going to try to be president, Samaranch said "Well, things one by one (...) first, go back to the Executive Board."

Samaranch Jr. will celebrate his 20th anniversary as a member of the IOC in 2021. He was elected at the same Moscow Session in which his father left the presidency after a historic leadership of 21 years.

Samaranch Jr., 62, has served important roles in various IOC commissions and in the most recent one, he hopes to oversee a successful Winter Games as head of the Beijing 2022 Coordination Commission.

During the interview, he rejected the notion put forth by some that the Tokyo Games need to be held despite the pandemic due to the money that the IOC will receive from television contracts.

"They have every right to think as they think but the Olympics are much more than a business," he replied.

"The proof is that yes, we generate a lot of money with television stations and sponsors, but it is that 93 percent of that money is invested in sports.

"If there are no Games, it is not that the IOC will be poorer but rather that world sport, which reaches the clubs, would have much less funding

"The Olympic Games are a demonstration that youth can unite, no matter the political system, race, or religion they come from, and that everyone lives together in an Olympic Village, and everyone respects each other.

"That overriding message, in a world of populism and with the radicality that exists at the moment, goes far beyond the world of sports. They are necessary values.

"There are very few institutions (such as the IOC) that are capable of defending them, therefore the Olympic Games are indispensable, moreover, emerging from a pandemic that affected the lives of all human beings"

Samaranch Jr. said that Tokyo 2020 could be one of the most symbolic Games in the history of Olympism.

The IOC member in Spain showed his complete confidence in the celebration of the Games in Tokyo from July 23, given the knowledge of what has happened with the pandemic, vaccines, regulations, and rule books for each one. of the groups involved with the multisport event.

He described the ban on foreign spectators as "a shame", adding "but we have to have a lot of respect and understanding for Japanese hosts who want to be extremely cautious and have the pandemic under control".

Samaranch Jr does not believe the survey that months ago announced an 80 percent disapproval of the Games by the inhabitants of Tokyo is valid today.

"The surveys that we handle at the moment offer much more balanced data."

Samaranch Salisachs believes that as the Games approach and vaccines continue to be implemented, the Olympic family will be "extremely well received" in the Japanese capital.