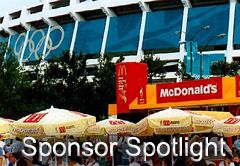 "He really did believe in the Olympics and more importantly the Olympic values," said Butler, who managed The Olympic Partner program for the IOC from 2004 to 2010.

"He knew by investing in the Olympic Movement, he would touch a lot of people and support athletes all over the world."

Skinner will retire from his position as CEO on June 30 and will be replaced by current president and chief operating officer Don Thompson. Skinner led the company since 2004 and was a driving force behind the "Plan to Win" strategy, rolled out in 2003.

His takeover signaled a new and more positive direction for the struggling company, said Kenneth Bernhardt, a professor at Georgia State University’s Robinson College of Business.

"When Jim Skinner took over the helm, McDonald's was a tarnished brand. The world had changed and the company had stayed the same," said Bernhardt.

"Under his leadership the company responded to the market changes by cleaning up the restaurants and adding innovative and healthy new products. The results have been dramatic at a time when many of the competitors have struggled," he added.

Butler said the new, healthier options made a big difference for athletes dining at the Olympics.

"He made huge strides in feeding athletes," said Butler.

International Sports Multimedia will continue to be the exclusive licensee for interactive entertainment software for the Olympics through 2020.

Through the renewed agreement with the IOC and the United States Olympic Committee, ISM will develop and publish different software including video and social network games.

"ISM is absolutely delighted to extend its relationship with the Olympic Movement," said ISM chairman and CEO Raymond Goldsmith.

"With the ability to think and plan long-term in the ever-changing world of social and digital entertainment, we intend to build even further upon the success established so far with the Olympic franchise in the entertainment software category."

ISM is releasing a number of games for the London Olympics, including "Mario & Sonic at the London 2012 Olympics Games" available on Nintendo Wii and 3DS.

For the first time ever, there will also be a Facebook game in which fans can build an Olympic Park online. Goldsmith told ATR back in October that social media is a growing part of its Olympic-relatedbusiness.

Dwight Howard will highlight Duracell’s "Rely on Copper to Go for the Gold" campaign ahead of the London Olympics.

The campaign was kicked off at a glitzy party Wednesday night, featuring Olympians Summer Sanders, Hunter Kemper and siblings Mark and Diana Lopez.

The battery brand, part of TOP Sponsor P&G’s consortium, says in a statement the campaign "gives consumers a portal to provide encouragement for the athletes through videos, pictures and texts as they train and compete for the Games in London."

According to local media, the agreement represents the biggest sponsorship deal for SNOC. The company will have television coverage rights with all 302 events broadcast on SingTel’s mio TV.