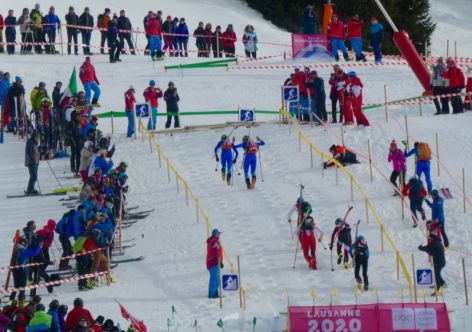 Baldini and his Italian teammate Luca Tomasoni were on their way to winning the first-ever men’s gold and silver medals in the ski mountaineering sprint event at the Youth Olympic Games.

The 17-year-olds hope their Lausanne 2020 success is a catalyst to future Olympic stardom. Both are hopeful that SKIMO will be proposed for the Milan-Cortina 2026 Olympic program.

"It would be the biggest dream and maybe we could be there, but it is a long time away still," Baldini said.

"Italy is a powerhouse and would have a great chance of medaling, so I think the chances are very promising for 2026," said U.S. athlete Grace Staberg.

SKIMO competitors representing 16 countries expressed excitement and gratitude about SKIMO’s YOG debut this week at the Villars-sur-Ollon ski resort perched high in the Vaud Alps east of Lausanne. For the sprint event, enthusiastic spectator lined the sides of the uphill part of the course.

"The venue is definitely really beautiful here and I’m blown away by the crowds," said Canadian racer Findlay Eyre. "In Canada the sport is much smaller.

"I’m mostly blown away by the energy here – it really pushed me hard."

"The course and conditions are great and the track is nice," said Austrian Julian Tritscher. "The public was very impressive with everyone cheering for us."

The Villars Winter Park course entails SKIMO sprinters starting with a steep, 61-meter zig-zagging ascent on skis, before transferring skis to their backs and climbing another 16-meters in ski boots. Next, they click back into their specialized bindings and descend, making giant slalom turns before a sweeping right-hand bend and short, but vigorous climb to the finish. Heats involve six competitors with three advancing to the next round. Top men's competitors complete the course in betweentwo minutes, 30 seconds and 2:45.

International Sport Mountaineering Federation (ISMF) Event Director Roberto Cavalli was more than satisfied with the delivery of the men’s and women’s sprint events at Lausanne 2020, three days after the individual event was contested.

"I am very, very satisfied – I think the spectacle was amazing," Cavalli tells Around the Rings shortly after the competition concluded. "We had a lot of people, we are sure that a competition like sprint, and also the individual on Friday, are very good for our Olympic dreams.

"We hope to become Olympic because I think ski mountaineering is a very good sport for the athletes and all of the movement," said the Italian ISMF official.

For athletes and ISMF officials, it is disappointing that ski mountaineering was not put forth by Beijing 2022 organizers and will not be part of the Olympic program two winters from now.

"For Beijing it is not possible for sure, but we hope 2024 Korea Youth Olympics and then Italy 2026, because Italy is a strong country who believes a lot in ski mountaineering," Cavallo said.

The sport seems to be expanding and growing internationally, however it is still predominantly practiced in the Alps, where Swiss, Italian and French athletes excel.

Despite being urged on by the home crowd and fan clubs ringing cowbells, Swiss athletes were shut out of the medals just two days after taking gold and silver in both the men’s and women’s individual events.

Purists of the sport may believe that ski mountaineering sprints are fan friendly and thrilling, but do not represent the true essence of the sport which is persevering up-and-down grueling, high alpine terrain over long distances.

"I actually really do not enjoy the sprint – it is my least favorite event," said Staberg, a Colorado resident. "I love the long team races, the verticals and the more raw side of it, but the amazing thing about sprint is that we can share everything about SKIMO on a short course for the spectators."

"Long distance competition, in my opinion, is not a format for the Olympics," Cavallo said. "Even the longer individual race, it is important to have the competition all around the resort for the spectacle and fans."

Written and reported by Brian Pinelli near Lausanne