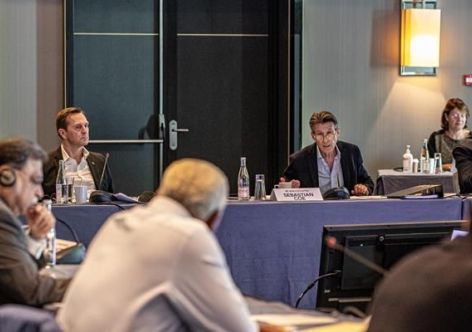 (ATR) The World Athletics Council takes expulsion off the table after the Russian Athletics Federation (RusAF) admits wrongdoing and apologizes for covering up doping violations by a top Russian athlete.

The Council, which in late January had threatened to kick RusAF out if it continued denying the charges and refusing to express contrition for them, announced on Thursday that it was imposing a $10 million fine for breaching the sport’s anti-doping rules.

Rune Andersen, who chairs the World Athletics taskforce on Russia, said at a press briefing on Thursday it was hoped that limiting the number to 10 "might trigger change" in the culture of athletics in Russia.

The remaining $5 million of the fine will be suspended for two years, to be paid immediately if during that period RusAF commits a further breach of the Anti-Doping Rules or fails to make meaningful progress towards satisfying the reinstatement conditions set by Council.

The World Athletics Council also approved a new set of criteria for RusAF’s reinstatement, including:

• RusAF establishing a Reinstatement Commission with representation from a number of organizations and at least two representatives appointed by RusAF’s Athletes’ Commission;

• Two international experts designated by World Athletics to participate in the work and meetings of the Reinstatement Commission, with RusAF bearing the costs;

• The RusAF Reinstatement Commission to draw up a detailed plan to ingrain throughout Russian Athletics a zero tolerance for doping culture, which will be subject to approval by the World Athletics Council.

• The two international experts to work with RusAF, in Russia, to ensure the plan is effectively implemented on the ground, and the change in culture is embedded throughout RusAF’s processes and decision-making.

"The package of sanctions approved by the Council today reflects the seriousness of RusAF’s wrongdoing and sends a clear message that we take these types of offenses by our Member Federations extremely seriously," World Athletics President Sebastian Coe said.

"The Council feels severely let down by the previous RusAF administration, which is why it has approved a new set of criteria for reinstatement of the Federation," Coe said. "This requires the new administration to set a clear roadmap for reinstatement, to be approved by Council, and greater oversight of the roadmap process by independent international personnel based in Russia."

The new rules follow a March 2 statement by the new RusAF president Yevgeny Yurchenko fully accepting the charges against RusAF and apologizing for his predecessor's conduct.

The federation has been suspended since 2015 over widespread doping but has been in even hotter water since November, when RusAF’s then-president was among seven officials and representatives charged with using forged documents and giving false explanations in an anti-doping investigation of Russian athlete Danil Lysenko.

Russian officials appealed to CAS after WADA in December imposed sanctions on Russia for manipulating and falsifying doping data from RUSADA’s Moscow laboratory.

RUSADA is appealing penalties that include a four-year ban on Russian athletes participating under their flag at major international competitions, including the next two Olympics.

Russia athletes who can prove to WADA’s satisfaction that they are clean will be eligible to compete as independent athletes under a neutral flag as was the case at PyeongChang 2018.

RUSADA was previously suspended for what has been determined as a vast state-supported doping system revealed in a 2015 WADA-commissioned report. Russia was reinstated by WADA in September 2018 with one of the conditions being full disclosure of doping data from the Moscow lab.

Coe said that the coronavirus outbreak affected the Council meeting in Monaco, with some members taking part via conference call due to travel restrictions.

But he says the pandemic's effects on World Athletics have been less pronounced than in many other federations.

"Our sport is actually in good shape," the federation president said. "We have many, many more opportunities than virtually any other sport for our athletes to be qualified for events and particularly the Olympic Games this year. Many of our athletes are already qualified because of course that process has been ongoing now for 10 months."

Coe says the federation will be working with member federations to deal with any "challenges" for individual athletes and stand ready to help them.

Coe revealed that the Council decided on March 19-21, 2021 as the new dates for the World Indoors in Nanjing.