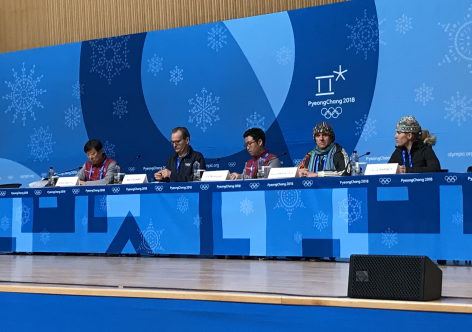 (ATR) High ranking PyeongChang 2018 organizers requested to meet with IOC member Adam Pengilly before it was decided he would leave South Korea following an altercation with a security official.

Pengilly has returned home from PyeongChang following his admission of a run in with a part-time security worker. South Korean media reported that Pengilly dragged the official several meters outside of the main press center before shouting swear words at him.

Pengilly's term as an IOC member was set to expire on Feb. 25. He was elected at the Vancouver Olympics as part of the athlete's commission. He served on the Coordination Commission for the PyeongChang 2018 Olympics.

The IOC relayed the decision to PyeongChang 2018, an official confirmed, after which the organizing committee accepted Pengilly’s letter of apology.

In his letter Pengilly admits to "running past [the security official] when you asked me to stop," and swearing, but did not admit to an altercation. It is understood that the security official was bruised and scratched as a result of the confrontation.

Adams said that IOC President Thomas Bach met with the security official today to apologize in person. The official is a university student in Korea and asked that no pictures be taken at the meeting to move on from the situation. Bach had already delivered an "unreserved apology" to PyeongChang 2018 in the wake of the incident.

The IOC Ethics and Compliance officer used CCTV footage from the incident when deciding Pengilly should leave South Korea. However, details of the incident remain inconsistent. Adams originally said that the victim was a volunteer, before clarifying who he was in a lengthy back and forth in today’s daily press briefing. The IOC said it does not plan to release the footage and considers the matter to be closed.

"We can speculate if we want, but the issue is Adam Pengilly agreed he had acted poorly, agreed that he had sworn, agreed that there had been an altercation and left," Adams said. "But as far as we are concerned that’s the end.

"He left. He apologized. He said it was poor behavior and has left."’

Adams faced a barrage of questions yesterday on the IOC’s consistency in its procedure for justice with regards to Pengilly and other members being connected with far more serious crimes. He said that the reasons other members have not received punishments is a lack of charges and the presumption of innocence throughout the process. However, Pengilly waved his right to that presumption in his admission. Adams also admitted the fact the incident happened at an Olympic Games also played a role in the urgency of the situation.

IOC Members Alex Gilady and Sheikh Ahmad Al-Fahad Al-Sabah have drawn scrutiny for accusations against them. A number of female journalists in Israel have spoke out against sexual harassment by Gilady to them, and Ahmad has been connected with football administrators in Asia who were charged by the U.S. department of justice for taking bribes.

Gilady has said he is suing his accusers in Israel for defamation, while Ahmad stepped down from his FIFA roles. Both remain on the IOC and were present for its 2018 meeting in PyeongChang.

A Korean worker for the Japanese broadcasting consortium died in the Gagneung Media Village.

PyeongChang 2018 confirmed the man’s death this morning after it was reported by Japanese media. PyeongChang 2018 spokesperson Baik You Sung said the man was discovered when his roommate tried to wake him. When he did not wake up, the man called the police. He was taken to as local hospital before being pronounced dead.

The full details of the death are being investigated by the police.

PyeongChang 2018 says there were 17 cases of Norovirus yesterday, bringing the total number of cases to 261.

Of those cases 217 have been released, and 44 are still in quarantine. Two of the confirmed cases were Swiss competitors, staying in the Phoenix Sports Park.

Sung said that the location of the two athletes played an important part in controlling the outbreak. Organizers continue to work to ensure that the norovirus does not hit the two Olympic Villages.

Written by Aaron Bauer in PyeongChang