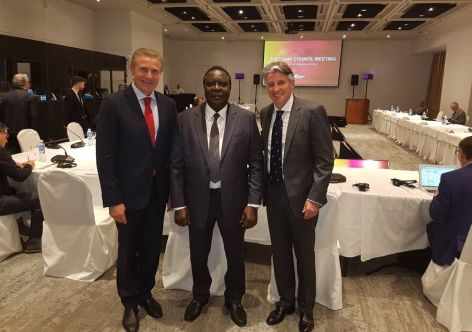 (ATR) Hamad Kalkaba Malboum tells Around the Rings his manifesto for the ANOCA Presidency remains largely the same as his 2017 campaign: professionalize and expand the organization so it can grow.

Malboum was barred from running for the Presidency of the Association of National Olympic Committees of Africa last year on the eve of the body’s 2017 General Assembly by the ANOCA executive board. He won an appeal to the Court of Arbitration for Sport, which nullified the election. CAS ordered ANOCA to hold new elections this year.

The 2017 election pitted Malboum against incumbent Lassana Palenfo, who had run ANOCA since 2005. In wake of the disputed election Palenfo stepped aside from running day to day operations of ANOCA, and resigned his position after the CAS ruling.

Malboum told ATR he was "comforted" by the CAS decision, saying he knew he would win on appeal since he had done nothing wrong. The ANOCA Executive Board alleged that Malboum had used government funds for his campaign. At the time ANOCA had no Ethics Committee, and the IOC had said its ethics committee could not rule on the matter.

"I feel I have the experience, the credentials and the know how to unite the African Olympic Movement and take ANOCA to another level," Malboum said.

"I intend to make ANOCA a well run organization as it is done at the level of the IOC and ANOC. I have already done it with the Cameroon National Olympic and Sports Committee and with the Confederation of African Athletics."

In the short-term Malboum proposes proper organization for African countries at the Tokyo 2020 Olympics. Medium-term goals include a "fully functional head office in Abuja." In the long-term ANOCA must have "an environment for accountability, responsibility, transparency, social responsibility, fairness and discipline".

That long-term environment would allow ANOCA to professionalize its continental multi-sport events, Malboum says, which then "attracts the media, sponsors and other partners" to fuel growth.

As part of his platform to "rebuild trust," Malboum says that resources must be diverted to the development zones around the continent, where high performance centers can be upgraded. That will allow Africa to "qualify the maximum number of athletes" to the Youth Olympics and Olympic Games.

In 2019 the continent will also host its inaugural Beach Games in Cape Verde. The Beach Games, African Games, and 2022 Youth Olympic Games are all opportunities that ANOCA must leverage to grow its brand, Malboum says.

"A strong brand that will help bring greater credibility and trust to our activities, and will act as a catalyst for people and organizations who are interested in working with the African Olympic Movement in general and with ANOCA in particular," Malboum said in his manifesto.

"It will also give us the tools to build internal cohesion within ANOCA and trust with external partners. We will leverage these to strengthen internal capacity and achieve impact on the continent. The resulting reputation then will enhance ANOCA’s identity and image."