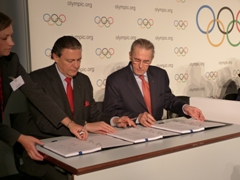 (ATR) As the race to replace him ramps up, IOC president Jacques Rogge says he is "happy" with his succession plan.

Each gave 15-minute presentations. It’s the first time presentations have been made by IOC presidential contenders to voters ahead of the election.

Rogge claimed IOC members now had a clearer view of the manifestos of the six men trying to fill his shoes.

"It was innovative and a good idea to have candidates present their program. The membership liked it very much… many members told me it was a good idea," he said.

"It was very interesting… very good programs were well articulated. I am happy about the process."

Wu told ATR that some IOC members had congratulated him on his speech. "I am committed, I always deliver," he said.

Among other objectives, he told delegates that tackling the threat of match-fixing, irregular betting and doping were among his top priorities if he is elected to the top job in world sport.

Asked if he thought he stood a real chance against presumed frontrunner Bach, Wu said: "The members have the vote. I am the longest-serving IOC member, for 25 years. I have served on nine different commissions. I built three Olympicmuseums. There are still two months to go, we wait and see."

Oswald told ATR the presentations had been useful to "position the candidates for the members".

The Swiss head of the International Rowing Federation said it was all to play for in the race to replace Rogge. Oswald will be lobbying hard in the coming weeks "trying to convince as many members as possible that my views and program of values deserves to be supported".

Rogge’s successor will be chosen at the IOC Session in Buenos Aires on Sept. 10.