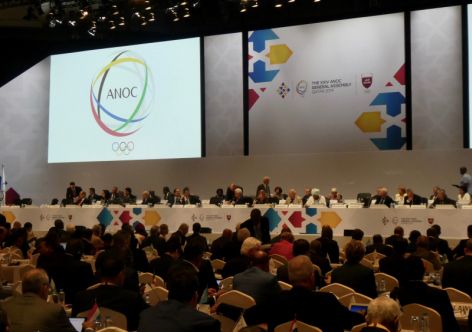 (ATR) The next Association of National Olympic Committees (ANOC) General Assembly has been delayed by 11 months due to the coronavirus pandemic.

ANOC and the Korean Sport & Olympic Committee (KSOC) jointly announced on Tuesday that the meeting, originally scheduled for Nov. 25-26 of this year in Seoul, will now take place in the South Korean capital on Oct. 26-27, 2021.

As usual, meetings of ANOC’s Executive Council and Commissions will be held in the days leading up to the General Assembly.

ANOC and the KSOC agreed last month to cancel the 2020 meeting.

"We are very grateful to the KSOC for their hard work and the speed with which they have been able to find new dates for next year’s ANOC General Assembly," ANOC Secretary General Gunilla Lindberg said in a statement.

"We wanted to make sure we found dates that were as convenient as possible for the NOCs and that did not clash with other major sports events. With no ANOC General Assembly this year, next year’s meeting will be extra special as it will allow the world’s NOCs to reunite once again and promote and celebrate the Olympic Movement."

The general assembly usually attracts at least two delegates from each of the 206 National Olympic Committees, along with representatives from upcoming Olympics and other multi-sports events. The IOC Executive Board often will meet on the sidelines. Some meetings have drawn upwards of 1000 or more attendees.

The KSOC had planned to use the 2020 meeting to promote its bid to co-host the 2032 Olympics with North Korea.

According to Yonhap, KSOC President Lee Kee-heung has talked about organizing a meeting that would include South Korean President Moon Jae-in and North Korean leader Kim Jong-un as well as international sports leaders. Lee had wanted to hold the meeting near the demilitarized zone separating the two countries.