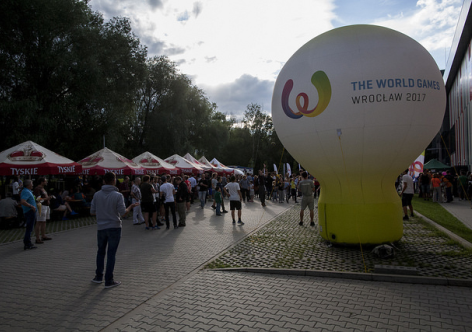 (ATR) A "fully citywide commitment" of more than 40 officials from Birmingham, Alabama are in Wroclaw, Poland to learn just how the World Games work.

The delegation is led by Birmingham 2021 chief executive DJ Mackovets, who is just months into the job. In an interview with Around the Rings, Mackovets said soaking up all kinds of knowledge pertaining to multi-sport events is imperative for an evergreen group with no construction commitments.

With four years to go until the next World Games, Birmingham does not need to build any permanent venues. Still, Mackovets said he instructed the group to grab "anything we can look at to help us understand the scale of what we have to produce."

Throughout the Games, members of the Birmingham delegation will attend meetings targeted for specific technical aspects of the Games. Among the groups represented in Wroclaw are Birmingham’s fire department, police force, and emergency medical services. All are getting a chance to learn from experiencing the Games.

On the sporting side, Mackovets says the team will rely heavily on different international federations to help get "strong coaching from the respective sports disciplines about venue set up, about sports presentation."

"For a lot of our folks it is their first shot of seeing a multi sport event and this helps them understand better the scale of what the World Games are," Mackovets said to ATR. "I am impressed with the feel inside the venues and even how it looks on television on the Olympic Channel. It really looks strong on television. The venues are put together well, they flow, and all the games’ décor is in there that you want. They’ve done a nice thing with this, they really have."

Upon returning home the Birmingham 2021 team’s biggest challenge will be to create grassroots enthusiasm for the Games and engage the business community to recruit sponsors. Many of the sports featured in the World Games program are not well known in the United States. Organizers will work to make sure both Birmingham and the Southeastern United States "understands what the World Games are". This should prove to be incredibly important since it is the first time since the inaugural edition in 1981 that the World Games are staged in the U.S.

"It’ll be good to get through this and get back home and prioritize the task list and give everyone their marching orders," Mackovets said. "There is certainly a lot of work to do and we don’t have to worry about venue construction; we just have to worry about planning with the IWGA and the international federations and focus on that instead."