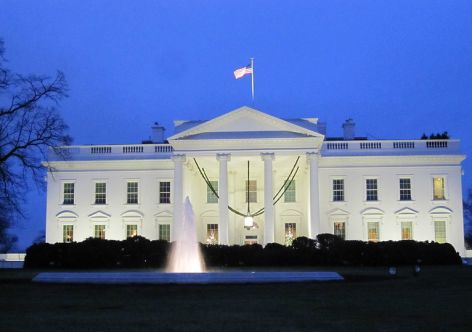 (ATR) Whether a boycott of the 2022 Beijing Olympics or equal pay for women athletes, the next US President could have a say.

George Washington University student Filip Vachuda has been researching the links between the Olympics and the national election. He offers this analysis of how the winner of the race for the White House could influence the Olympics in years to come.

The Olympic Games have by no means been a raging issue this election cycle. But the outcome of the race for president, as well as contests for control of the House and Senate, could significantly affect U.S. participation in future Olympics – including its prospective hosting of the Games.

Policy differences between the candidates could further determine whether the U.S. provides equal resources to female athletes on its national teams; or even lets its athletes protest at the 2020 Olympics in Tokyo.

Perhaps the most contentious Olympic-related debate of this decade may be over whether the U.S. should attend the 2022 Winter Olympics in Beijing.

Republicans have introduced resolutions in both the Senate and House this year calling for the IOC to re-bid the Games due to China’s human rights violations. Few if any elected officials have called for an outright boycott, and President Trump has so far been non-committal.

But by routinely engaging in trade wars and other disputes with China, we know Trump has shown a clear willingness to take China to task over perceived United States interests, thereby creating the possibility for him to use a boycott as a tool of foreign policy leverage.

Many Republican legislators have likewise been promoting tough China policies and could see supporting a boycott as a way of shoring up support; at a time where public distrust in the Chinese Communist Party, especially among Republicans, is significantly rising.

While Democratic candidate Joe Biden has aligned himself with a similarly hawkish China policy, many believe he would be more conciliatory than Trump because of his past support for a strong China and lesser appetite for more confrontational measures. That means those favoring a boycott would probably be better served by voting for Trump. In saying that, as the United States has vital strategic interests in countering China regardless of who is in power, it is likely that the state of US-China relations next year will prove most decisive in determining whether a boycott occurs.

Future Games held in the United States could also be impacted by the 2020 election. Earlier this year, President Trump pledged full federal support for the 2028 Summer Games in Los Angeles, while there is no reason to doubt that Biden would do the same. Even so, Trump has already signaled that the federal government would intervene if Los Angeles fails to reduce homelessness; implying Trump may be less willing than Biden to give Los Angeles a high degree of autonomy in organizing the Games.

Both Trump and Biden, in addition, are likely to lend their support to a Salt Lake City bid for the 2034 Winter Games. Trump has more experience than Biden in bringing sporting events to the U.S. He successfully lobbied FIFA members to bring the 2026 World Cup to North America, and according to the head of Los Angeles’ Olympic bid, was more proactive than Obama and Biden in helping secure the 2028 Games. In theory, a second Trump administration might therefore contribute more effectively to Salt Lake City’s efforts to host the Games a second time.

There are some caveats to this, though. First, if Trump does choose to boycott or otherwise undermine the 2022 Games, this would put both the 2028 Games and Salt Lake City’s 2034 bid at risk for retribution, whether by China or the IOC. Second, the Trump administration’s recent threats to withdraw funding from WADA could have a similar effect and may in fact jeopardize the participation of US athletes in future Games.

That means the effects of the election on future US-hosted Games could go either way, as the benefits of Trump’s support of and experience with large sporting events relative to Biden could be overshadowed by cool responses to his political demands.

The election results could, furthermore, influence various internal policies of U.S. sports federations; the most high-profile of which being the level at which female national athletes are compensated.

Democrats have introduced various pieces of legislation proposing that all amateur sport governing bodies must provide equal resources and wages to women in order to be nationally recognized. One bill, if passed, would even prohibit the use of funds for the 2026 World Cup until the US women’s soccer team receives equitable pay.

As none of these bills have attracted any Republican support, however, their passage and legal effect would likely depend on both a Biden win and Democrats taking the Senate.

Another issue that could be affected is the ongoing debate over the IOC’s Rule 50, which forbids athletes from publicly protesting during their Olympic events. Biden and the Democratic Party have been broadly supportive of recent Black Lives Matter protests in U.S. cities, while Trump has by and large condemned them.

A Biden administration would therefore be more likely to ask the IOC to revisit Rule 50 and direct the U.S. Olympic Committee to support athletes who protest at Tokyo 2021. A Trump administration, meanwhile, would almost certainly side with and enforce existing IOC policies, a move likely to prompt vocal resistance from several athletes and their supporters.

This election, in sum, may very well have an impact on the place or character of future Olympics. But it’s worth remembering that these predictions are speculation based on the relatively little we know. The topic of the Olympics simply isn’t discussed on a consistent enough basis to accurately project what politicians will do, nor is it one that tends to create partisan divides.

If nothing else, we should take heart that the vast majority of our Olympic- and sport-related bills, from protecting athletes from overseas surveillance to asking for an IOC review of Jim Thorpe’s records, to giving athletes greater representation and protection from abuse, are put forth on a bipartisan basis.

Our legislation and support of our national athletes comes from an understanding that sport is a tool for the common good. Hopefully the government's future Olympic-related decisions can stay that way.

Filip Vachuda is a junior at the George Washington University studying International Affairs and Economics. He is primarily interested in the intersection of sport and politics, as well as the governance of international sports federations.