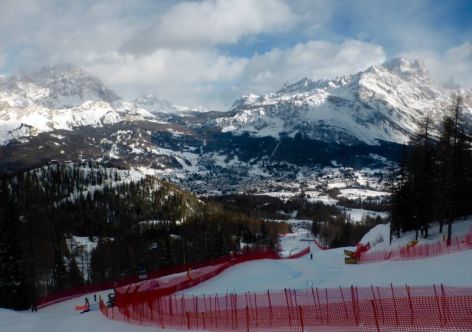 (ATR) The FIS World Cup Alpine skiing Finals – scheduled for March 18-22 in Cortina d’Ampezzo, Italy – have been cancelled due to the coronavirus outbreak.

The World Cup Finals in Cortina were to serve as a test event for the 2021 Alpine World Ski Championships. (ATR)Organizers were hoping to host the finals without fans, however the decision to cancel the event was taken during an emergency International Ski Federation (FIS) board meeting on Friday.

Every country besides Italy voted in favor of cancelling the season finale races, according to the Associated Press.

FIS, in a statement, said the World Cup Finals would not be relocated "[d]ue to the lack of short-notice alternative locations to stage such a large event and which do not have travel restrictions to enable all athletes to be able to participate or travel onward after the event".

The discipline and overall title winners will be confirmed after the last scheduled races on March 15.

"This is certainly not the way we wanted the season to end without World Cup Finals, but we must respect this very serious situation," saidFIS President Gian Franco Kasper.

"We look forward to recognizing the winning athletes at a later date when we can properly celebrate their accomplishments."

Nearly 150 people have died in Italy, the epicenter of the outbreak in Europe. More than 3,000 have tested positive for the virus.

The Veneto region of Italy, home to Cortina, is among the hardest hit by the coronavirus in Europe. Veneto, along with neighboring Lombardy, are under a level four travel warning by the U.S. government. Other countries, Canada and Norway, have issued similar warnings.

While Cortina hosts women’s World Cup events annually, the World Cup Finals were to serve as a final test event for the 2021 Alpine World Ski Championships. A new men’s downhill course was being prepared to be tested by elite international racers for the first time.

Women’s Olympic races are planned at the luxurious Italian ski resort, and 1956 Olympic host city, during the Milan-Cortina Games in 2026.

The cancellation now leaves only two weekends of World Cup racing for the men and one for the women. The men have speed races this weekend in Kvitfjell, Norway, to be followed by tech races in Kranjska Gora, Slovenia, March 14-15. The women will now conclude their season in Åre, Sweden, with technical races March 13-15.

Italian Federica Brignone is aiming to become to the first Italian woman to win an overall World Cup title in the 53-year history of the tour. She leads three-time defending overall champion Mikaela Shiffrin by 153 points, with 100 points awarded for a victory.

Shiffrin announced on Thursday that she is returning to Europe after a month long absence following the tragic death of her father, Jeff. The U.S. ski racing star and two-time Olympic champion has yet to officially declare if she will race in Sweden. If she does, Shiffrin will have just three races to catch Brignone and defend her title.

On the men’s side, Frenchman Alexis Pinturault carries a slim 26-point lead over Norwegian Alexander Aamodt Kilde into the final two weekends of racing. Austrian Marcel Hirscher, who retired prior to the 2019-20 season, had won the previous eight overall World Cup titles.

The FIS and local organizers have also announced the cancellation of the World Junior Ski Cross and Snowboard Championships, scheduled for Saint-Lary, France, March 19-25, due to the Covid-19 outbreak. Some 200 athletes from 22 countries were expected to compete.

The men’s tournaments were set for Sofia, Bulgaria; Tallinn, Estonia; Istanbul, Turkey; and Kockelscheuer, Luxembourg. The women’s events were slated for Jaca, Spain and Katowice, Poland.

"I would like to thank the Medical Committee for their recommendation after very intense discussions over this weekend, I also thank our Council Members for their support of this recommendation in such challenging times," said IIHF President René Fasel following the Council’s Extraordinary meeting in Budapest earlier this week.

"We will carefully evaluate on a daily basis the developments within our member countries."