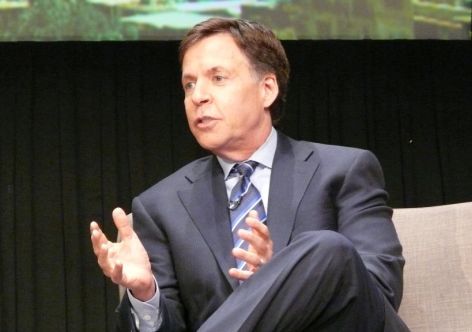 (ATR) An end of an era as Bob Costas announces he is stepping down from hosting the Olympics on NBC.

Costas, who is 64, has served as primetime host of every NBC Olympics since 1992, a U.S.-television record of 11. Costas also served as NBC’s late night host at the 1988 Seoul Olympics.

He will be replaced by Mike Tirico, who joined NBC from the sports network ESPN last July. Tirico made his Olympics debut at the Rio Games as daytime host and host of the Closing Ceremony.

The announcement was made exactly one year to the day before the PyeongChang Opening Ceremony on February 9, 2018.

"It has been both a privilege and an incredible personal and professional experience to have been part of NBC’s Olympic coverage all these years," said Costas in a statement.

"I’m especially appreciative of all the talented and dedicated people I worked for and with on those broadcasts. I always felt that, in a certain sense, I was carrying the ball for them. It’s been a wonderful run, but I just felt now was the right time to step away and I’m grateful that NBC left that decision to me."

Costas is the longest-tenured sports announcer at NBC, having worked for the network for 37 years. He will continue to "have noteworthy roles in NBC Sports and NBC News programs."

"The level and longevity of Bob’s tenure have left an indelible mark on American television and the Olympic Games," says Tirico. "I am honored to call him a friend, humbled by this opportunity, and thankful to the many people who have helped make this possible."

Tirico, who is 50, has already handled a variety of assignments for NBC in the seven months he’s been with the network. In addition to his work in Rio, he has served as host for NBC’s NFL coverage as well as The Open Championship and Ryder Cup golf events and Breeder’s Cup horse racing. He has also worked play-by-play for both the NFL and Notre Dame college football coverage.

Discovery Communications and Eurosport are marking the one year to go until the PyeongChang 2018 Winter Olympics with an enhanced digital strategy.

The two communications giants are seeking to create the "first digital Olympic Games across Europe" by delivering more engaging content on all screens. The strategy marks the shift in the global media landscape that places more emphasis on social media and screens other than traditional television.

Eurosport will provide live coverage of more than 100 events during the PyeongChang 2018 Games available on any device at any time.

"Our commitment to redefine the Olympic Games viewer experience and drive more engagement for all people across Europe is a bold statement that we intend to meet and exceed," said Discovery Networks International president JB Perrette.

"As a purpose-driven company, Discovery shares many of the values represented by the Olympic Games, and we are excited to tell these riveting stories of human ambition, sacrifice and achievement."

The storytelling elements provided by Discovery and Eurosport will focus on live coverage, innovative use of technology including virtual reality, famous personalities telling the stories of the athletes and color pieces displaying the atmosphere and culture of South Korea.

"Offering every moment of the Olympic Games is essential given the expectation of fans and Eurosport’s commitment to live sport," said Eurosport chief executive officer Peter Hutton. "A mark of our ambition is that we will go even further than any previous broadcaster through exclusive on-site access and a content strategy formed around the pillars of Live, Innovation, Human and Atmosphere."

The PyeongChang 2018 Winter Olympics are now a year away with the opening ceremony scheduled for Feb. 9. The Winter Games will conclude on Feb. 25, 2018.