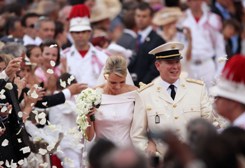 attend the religious ceremony of the Royal Wedding of Prince Albert II of Monaco to Princess Charlene of Monaco in the main courtyard at the Prince's Palace on July 2, 2011 in Monaco. The Roman-Catholic ceremony follows the civil wedding which was held in the Throne Room of the Prince's Palace of Monaco on July 1. With her marriage to the head of state of the Principality of Monaco, Charlene Wittstock has become Princess consort of Monaco and gains the title, Princess Charlene of Monaco. Celebrations including concerts and firework displays are being held across several days, attended by a guest list of global celebrities and heads of state.

(ATR) HSH Prince Albert II of Monaco weds Charlene Wittstock of South Africa in a match made in Olympism.

Albert, a five-time Olympic bobsledder, met Wittstock, a swimmer at the Sydney Olympics, when he presided over a swimming competition in Monaco in which she was competing.

They were married in a civil ceremony on Friday in the palace throne room, followed by a religious ceremony Saturday at the foot of a double marble staircase in the courtyard of the Prince’s Palace. About 40 members of the International Olympic Committee, of which Albert has been a member since 1985, mingled with heads of state, royalty and stars of the fashion world and the silver screen.

Wittstock will now be known as Charlene, Princess of Monaco.

IOC President Jacques Rogge led the IOC delegation, which also included Frank Fredericks of Namibia, chair of the athletes’ commission and Sergei Bubka of Ukraine. The Grand Duke of Luxembourg and Pal Schmitt, president of Hungary, received invitations as heads of state as well as IOC members. Albert invited all of the 100-plus IOC members to the festivities.

The IOC members will then hustle to Durban, South Africa, for the 123rd Session, where they will be joined by Albert and his new bride. The honeymooners will host a party on July 7 for IOC members.

Nicolas Sarkozy, president of the French Republic, attended the wedding, but will not travel to Durban to speak on behalf of Annecy in its bid to host the 2018 Winter Olympics. The vote will take place on July 6. During previous presentations by bid cities, Albert has often asked questions pertaining to athletes.

Also from the sports world, a gymnastics royal couple, Nadia Comaneci and Bart Conner, attended the "Princely Wedding," along with swimming great Donna de Varona. Former IOC members Pernilla Wiberg, a skiing gold medalist from Sweden who lives in Monaco and is now part of the Annecy bid, and Charmaine Crooks of Canada were also on the official guest list.

Glamour on the Riviera

The extravaganza, which featured a concert by the Eagles, fireworks and elaborate dinners, reportedly cost $75 million. It had echoes of the 1956 wedding between Albert’s parents, Prince Rainier III and movie star Grace Kelly.

Albert and the new Princess said their "Ouis" in front of about 850 people, including Albert’s sisters, Caroline and Stephanie. Before entering the courtyard, Charlene and her father walked through a crowd of about 3,500 people, who had seats outside to watch the ceremony on giant television screens. Charlene’s satin dress, featuring a long train, was designed by Giorgio Armani. According to the palace, it was embellished with 40,000 Swarovski crystals, 2,000 mother of pearl drops, platinum coated thread and 30,000 'golden stones.’

The groom wore the white dress uniform of the Carabinieri royal guard, which had gold crowns on the lapels.

Albert, 53, occasionally winked at Charlene, including just before their vows and after he placed the Cartier ring on her finger. She burst out laughing as she put his ring on his finger.

Albert’s cousin on his mother’s side, Chris Levine, was best man and Donatella Knecht de Massy, whose husband Sebastien is a cousin on Albert’s father’s side, was maid of honor.

Opera star Renee Fleming and Italian singer Andrea Bocelli sang at the wedding, which was live streamed on the official palace website – and in 3D in France, Spain and Poland. A monogram with a back to back "A" and "C" under a crownappeared on the screen.

The couple was showered with petals as they walked outside the palace to their car, provided by Lexus. The license plate, naturally, was 001M.

After driving through the streets of the principality and waving to the crowd lining the streets below flags of Monaco and South Africa, they arrived at a small chapel, Saint Dévote’s Church. Just as Princess Grace did 35 years earlier, Charlene went inside to lay down her bridal bouquet, accompanied by her prince. In her one emotional moment, the new princess dabbed tears from her eyes.

They wedding dinner, prepared by chef Alain Ducasse, and a royal ball took place at the Opera Garnier and on the Terraces of the Opera.

The two-day event was a public holiday in Monaco. Charlene has lived in Monaco since 2006 and took French lessons and converted to Catholicism before the nuptials.

The nearly 8,000 Monegasques hope the marriage will produce an heir to the throne, but a future Olympian would also be likely.

Wittstock, whose mother is a swimming coach (and whose father is a photocopier salesman), was on the South African 4 x 100 medley relay team that placed fifth. She swam the backstroke leg.

For those who would like a token of the wedding, the Boutique Official is offering a collection of memorabilia. The items range from a photo for 12 Euro and a keyring for 25 Euro to an 18-karat charm for 480 Euro.