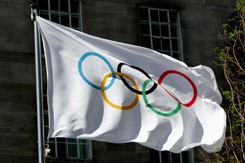 during the IOC Executive Board meetings, held at the Westminster Bridge Park Plaza on April 6, 2011 in London, England.

(ATR) Olympic organizers in Sochi and Rio de Janeiro tell Around the Rings they are thrilled NBC will broadcast the Games in the U.S. through at least 2020.

"I know the IOC has been working very hard recently to make it happen and the result speaks for itself.

"I also want to believe that Sochi 2014 has made its very little but still [substantial] contribution to the NBC decision while briefing NBC forward teams on their visits to my native city Sochi."

NBC Sports chairman Mark Lazarus revealed during Tuesday’s press conference every event through 2020 would be available live on at least one of the NBC/Comcast platforms but that storytelling would still be wrapped around premium events on tape delay for family viewing in primetime.

He said there would be a "smart plan" to allow the "super fans to watch events live and not detract from the primetime audience" when the Olympics are in host cities in vastly different time zones, a guarantee for the next two Winter Games.

Sochi is eight hours ahead of Eastern time in the U.S.

The location of the 2018 Olympics will present either a somewhat easier ora far more difficult challenge for programming executives.

European candidates Annecy and Munich are each six hours ahead.

PyeongChang is a full 13, meaning primetime on the East Coast of the U.S. would correspond to late morning of the following day in South Korea.

Rio, however, is just a single hour ahead, a boon for both NBC and the organizing committee.

"In Rio 2016 we are very happy with the news that NBC was given the rights of transmitting the Olympic Games to the US," Rio 2016 president Carlos Nuzman told ATR.

"NBC's recognized experience, tradition and excellence in broadcasting the Olympic Movement guarantees that Americans will have the best TV coverage of the Rio 2016 Games at their disposal. We would like to congratulate NBC and IOC for a partnership destined to success."

Lazarus guaranteed Tuesday that all coverage from Rio will be live and that there will be more live hours than ever on both broadcast and cable. The Sochi plan is too early to determine, he said.

With the 2016 Olympics in South America and no 2020 bid expected from the U.S., it’s doubtful the 2020 Summer Games will be staged in a time zone fewer than six hours ahead. Canada could bid, but 2022 seems more likely. Rome, the early frontrunner for 2020, is six ahead.

The package guarantees NBC will broadcast 17 Olympics, more than any other network. ABC has not aired the Games since 1988 in Calgary, and Fox has never been the broadcaster in the U.S. Both bid unsuccessfully in this week’s negotiations.