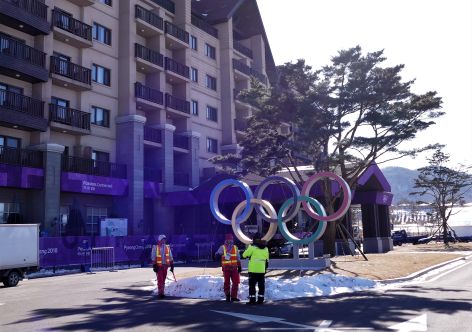 (ATR) Olympic security personnel are in quarantine to contain a norovirus outbreak at the PyeongChang 2018 Winter Games.

PyeongChang 2018 organizers (POCOG) have confirmed 32 cases of norovirus, 21 of which are among private security forces being held at the Horeb Youth Center in Jinbu. The security personnel staying at the center reported symptoms of stomach pain and diarrhea on Feb. 4.

POCOG issued a statement with a list of measures to prevent the spread of the outbreak such as thoroughly washing hands and thoroughly cooking food. The statement even includes a boil-water-before-drinking advisory.

An investigation is ongoing into the 1,023 residents of the youth center by the Korean Center for Disease Control and Prevention to determine how the highly-contagious virus was contracted and spread.

In order to combat the diminished security force by the quarantine, POCOG has called in 900 South Korean military personnel. The soldiers will be stationed across 20 venues until the private forces are healthy once more.

"The number of patients would have to be found after the tests [are completed]," Lee told reporters at a press conference on Feb. 6. "[Those who are sick] need only a few days of medical treatment."

This is the second international sporting event in the past seven months to suffer from a norovirus outbreak. The 2017 IAAF World Championships in London also had a similar norovirus outbreak that affected 30 people and some athletes.

"As a president of POCOG, I would like to apologize for this," Lee said. "Our disease control center and other related government agencies here are now discussing countermeasures and will come up with proper measures."

Athletes begin competition in biathlon, luge and ski jumping on Feb. 7 before the Opening Ceremony begins on Feb. 9. Organizers are optimistic the outbreak can be contained and diminished before the Games officially begin.