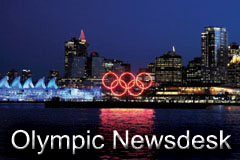 An opposition group to the Madrid 2020 bid is now collecting signatures against the bid.

The group, "No Queremos Madrid 2020" roughly translates as "we don’t want Madrid 2020". They say the city can not afford the Olympics calling it a "financial suicide" for the city. The cost of the Games was the key point of contention when the city approved the bid just last week.

On the group’s website, they claim 260 people have signed the petition, which was launched on Monday. They hope to have 25,000 signatures by the end of the campaign.

It is unknown the scope or size of the organization, or if Madrid 2020 is taking note of the opposition.

Of the major bids for the 2020 Games, this is so far the only bid that has faced opposition.

IOC member Prince Albert and his wife Princess Charlene are suing a French publication over incorrect reports of their relationship.

On Monday, proceedings began against French publication L’Express which published reports claiming Charlene, was prepared to leave Albert shortly before their wedding in Monaco.

The couple’s lawyer told AFP that the magazine published "incorrect facts about their private life."

London 2012 chair and IAAF vice president Sebastian Coe succeeds Prince Albert as the latest sports figure to have his nuptials blessed by the governing body for athletics.

"This is the second marriage for the father of four, a two-time Olympic 1500m champion (1980/84) who set twelve World records during his career," reads an item in the IAAF's latest newsletter. "His bride is a champion at real tennis, the daughter of former England cricket captain M.J.K.Smith."

Alberto Contador has a new date for his doping trial.

The Court of Arbitration for Sport announced that the World Anti Doping Agency asked for a second round of information sharing in the Spanish cyclist’s case.

WADA and the International Cycling Union are appealingthe Spanish Cycling Federation’s decision that cleared Contador of doping. He tested positive for clenbutorol during the 2010 Tour de France, which he won. He finished fourth at the road race at the Beijing Olympics.

This is the third time his trial date has been reset. CAS said a new date will come "in the coming days".

The future of the 1996 rowing venue is uncertain.Residents ofGainesville, where the venue is located, call it an "asset" and urge the government to assume control of its maintenance.

The New York Times Magazine investigates what benefit there was to South Africa hosting the 2010 World Cup.

Olympic champion Yu Na Kim is Korea’s number one fashion icon according to The Chosun Ilbo. According to the paper "it was the clothes she wore at the final presentation for Pyeongchang's 2018 Winter Olympics that made her an unbeatable fashion icon." The family of IOC member Kun Hee Lee came in second.

In order to prepare for the Rugby World Cup, Russia’s rugby team wrestled with the country’s Olympic wrestling team.