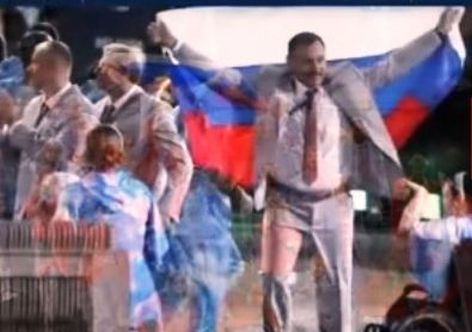 (ATR) The International Paralympic Committee cancelled the accreditation of the Belorussian delegation member who carried a Russian flag into the Paralympics Opening Ceremony.

IPC communications director Craig Spence confirmed to Around the Rings that the man was not an athlete, but a guest of the president of the Belorussian National Paralympic Committee. Spence said that his accreditation was swiftly revoked, but there were no other sanctions to the NPC currently.

"This was an individual who is not an athlete or coach we took the actions against the individual," Spence said. "If they continue to break the rules we will look at some other form of action, but for now we are giving them a warning"

Russia has been banned from the Rio 2016 Paralympics after the IPC found evidence of a state sponsored doping system aiding Russian para-athletes. The IPC suspended the Russian NPC for violation of the Paralympic doping code. Criteria for the reintroduction of Russian para-athletes to competition will be decided after Rio 2016.

Russian media identified the Belorussian individual as Andrei Fomachkin a triathlete who competed for the Soviet Union and served as the deputy tourism minister for Belarus. A spokesperson for Belorussian President Aleksandr Lukashenko released a statement supporting the gesture. The spokesperson said that Belarus was "appalled" by the ban on Russian athletes.

A spokesperson for the Kremlin also voiced support for the gesture. Dmitry Peskov told Russian media the gesture was a "bold act."

"What the Belarus Paralympians did is worthy of admiration," Peskov said in a statement. "We certainly treasure this gesture of solidarity with our Paralympians, who were unjustly stripped of a chance to take part in the Paralympics."