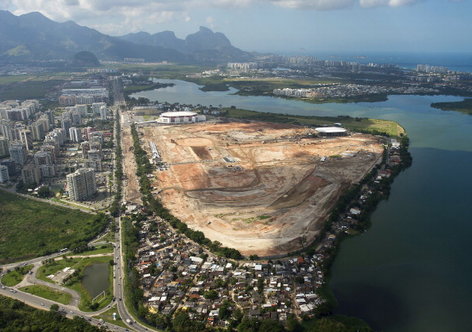 RIO DE JANEIRO, BRAZIL - MAY 10: The Olympic Park for the 2016 Olympics is seen under construction in the area previously occupied by the Jacarepagua Autodrome, on May 10, 2013 in Rio de Janeiro, Brazil. The Olympic Park will host the competitions for 10 Olympic disciplines (basketball, judo, tae - kwondo, wrestling, handball, hockey, tennis, cycling, aquatics and gymnastics). The Main Press Centre (MPC) and the International Broadcasting Centre (IBC) will also be built on the site. (Photo by Buda Mendes/LatinContent/Getty Images)

Amid waves of concern, the IOC says it is "too premature" to talk about stripping Rio of the 2016 Games.

On Wednesday, more than half of the 28 sports on the Rio program expressed serious concerns that some of their venues might not be finished with some calling for a plan B. In the joint meeting with the IOC executive Board, coordination commission chair for Rio Nawal El Moutawakel said she shared the concerns and "deep frustrations."

Asked by Around the Rings if there was discussion of the 2016 Olympics being relocated if there was no acceleration in preparations, he didn’t rule out the possibility.

"There isn’t. At this stage, that would be far too premature," he said.

When asked the same question earlier, IOC EB member John Coates told a group of reporters, "We will help and get some expertise in there and make sure we deliver this thing."

Saying that time was tight and the "clock is ticking," Adams said the IOC hoped that the package of special measures announced Tuesday to help Rio, including the formation of several task forces, would improve the tempo of progress.

"We believe we can deliver," he added.

An IOC source told Around the Rings,"They are totally in denial."

Adams put a positive slant on the meeting, though ATR understands that no decisions were made which would spur Olympic preparations.

He said that there was a "real sense of urgency in government and organizing committee. From that sense, it’s positive."

Along with venue updates, Nuzman and Paes reported on Rio 2016’s hiring and communications strategy and accommodations.

Adams said there was no discussion at the EB of contigency plans for the international federations with the focus still on delivering the Games in the venues locked down in the Rio 2016 master plan.

Adams said the composition of the emergency IOC task forces for Rio, which include construction and operations working groups, could be announced on Friday.

The IOC announced the doping violation today. The 27-year-old, who placed eighth in the 15km Skiathlon event, will now be subject to International Ski Federation sanctions, which are likely to include a ban.

The 22-year-old and his four-man bobsleigh team were disqualified from the Sochi Games, where they had placed 27th. The International Bobsleigh and Tobogganing Federation will consider any further action under its own anti-doping rules.