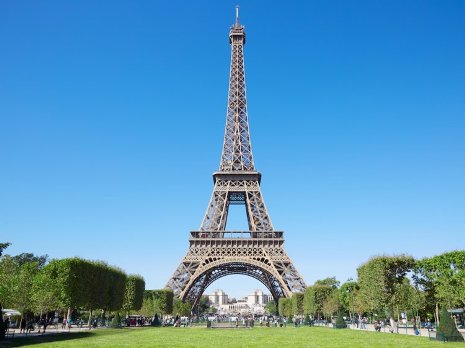 (ATR) The Eiffel Tower will be sporting a new look ahead of the Paris 2024 Olympic and Paralympic Games.

The iconic landmark will have a golden hue described as "yellow-brown" after an extensive revamp is completed in 2022. The color, which Gustave Eiffel himself wanted for the monument, will replace the "Eiffel Tower brown" that has been used since 1968.

Twenty-five painters strip, clean, apply rust-proofing and the final coat of paint to the entire 324 meter (1,063-foot) structure. All the painting is still done by hand. The cost of the project is reported to be $60 million.

This is the 19th time that it has been repainted, an average of once every seven years. Each repainting normally takes about two years to complete. The latest job, which began in 2019, will take longer than that. According to AFP all the previous coats of paint are being removed this time around. Given that the older layers of paint include lead, health protocols have been put in place for the workers.

The colors have changed several times since the Tower was opened in 1889, passing from red-brown to yellow-ochre to chestnut brown and finally to the color it has been for more than 52 years.

The Eiffel Tower will play a prominent role during Paris 2024. It will be the backdrop for the triathlon and open water swimming events to be held in the Seine. The areas surrounding the Tower are expected to host a series of entertainment events during the Games.

The Tower is currently closed to the public due to the COVID-19 pandemic.