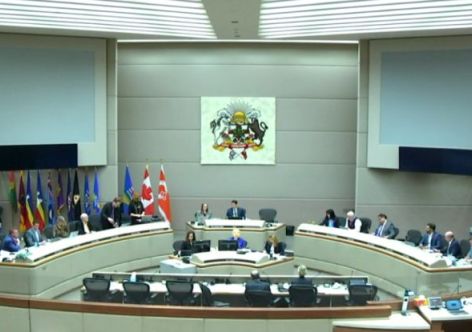 The full city council has the final say in the matter, and is expected to vote on whether to end the bid when it meets on Wednesday morning.

City Councillor Evan Woolley advanced the recommendation in council chambers on Tuesday after about four hours of closed door meetings.

Woolley blamed the lack of a funding agreement for the public portion of the cost of hosting the Games as the reason for the committee's decision.

The three levels of government - the city of Calgary, the province of Alberta and the federal government in Ottawa - have failed to agree on how to divide the cost despite last ditch talks.

A planned plebiscite on the bid is scheduled for November 13, just two weeks away. That would be canceled should the Council vote to end the bid.

"There is not a fiscally responsible plan without these funding agreements... the clock has run out and it's time to move on," Woolley said.

But Calgary 2026 board chair Scott Hutcheson is not ready to throw in the towel. In a statement released after the Olympic Committee's recommendation to end the bid, Hutcheson said that talks were still ongoing to reach a funding agreement.

"Today, we were part of a productive and constructive discussion at City Hall. Tomorrow’s vote at Council will be of extreme interest to all Calgarians. Negotiations with government are positive, are continuing – they have not stopped – and we remain confident an agreement will be reached. We know thousands of Calgarians understand what’s at stake and the importance of deciding the outcome themselves. These would be Canada’s Games, Calgary’s choice."

Calgary 2026 has taken to social media, calling on citizens to "Show Up and Support the Bid" on the steps of city hall on Wednesday morning as the CIty Council begins debate on whether to end the effort.

Teri McKeever, who in 2012 became the first female to become head coach of a U.S. Olympic swimming team, was accused by 19 of her swimmers during an investigation by The Orange County Register