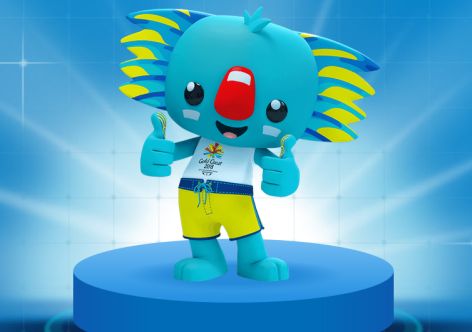 (ATR) The Gold Coast 2018 Commonwealth Games announced its official mascot Monday morning, introducing the koala named Borobi. The name is derived from the word for koala in the indigenous language Yugambeh.

Organizers say the mascot will raise awareness for the preservation of koalas in Australia and help with conservation and protection efforts.

The announcement was made to commemorate the two-year mark until the beginning of the 2018 Commonwealth Games on April 4, 2018.

The Commonwealth Games will be the largest sporting event in Australia since the 2000 Summer Olympics in Sydney.

Bidding officials from Budapest, Los Angeles, Paris and Rome will take part in a series of IOC workshops this week.

The 2024 candidate cities are meeting at Olympic Broadcasting Servicesheadquarters in Madrid on April 6 to 7 for discussions dedicated to theOlympic Village and the IBC/MPC.

"These workshops complement the ones organized in November last year aspart of stage 1 of the candidature process which focuses on Vision,Games Concept and Strategy," an IOC spokesman tells Around the Rings.

The Masters Tournament begins April 7 in Augusta, Georgia and brings the top golfers from around the world to compete over four days for the coveted Green Jacket.

The tournament is the first major of the Professional Golfers Association Tour and is the only of the four to be staged at the same course each year - Augusta National Golf Club.

The field of golfers is also smaller at the Masters than other major tournaments because it is invitation only. After two days of competition the field is narrowed to 50 who advance to the final two rounds of competition.

The 2016 edition is particularly intriguing because it will give a sense of where each of the top golfers is ahead of the Olympics in Rio de Janeiro. Golf will be played in the Olympics at the Rio 2016 Games this August for the first time in 112 years.

The Rio 2016 Summer Olympics will be 100 days away on Friday, April 8. The Opening Ceremony of the Games will take place on August 5 at the Maracana Stadium.

Athletes from around the world will compete in 306 events across 28 sports throughout the 16 days of competition. Rugby and golf will be competed for the first time in many decades at these Games.

More than 10,000 athletes from 206 National Olympic Committees are expected to compete throughout the 38 venues scattered in scenic Rio de Janeiro and Sao Paulo.