Team USA’s biggest stars were on display at the U.S. Outdoor Track and Field Championships and none burn as brightly — or as intermittently — as Sydney McLaughlin.

A little more than a month later at the Tokyo 2020 Olympics, McLaughlin broke that world record — again with Muhammad on her heels — to claim her first Olympic gold medal with a staggering time of 51.46 seconds. She added another gold in the 4 x 400-meter relay.

McLaughlin, 22, has run only five times this year. She opened the season with a stellar performance in the 100-meter hurdles (12.75 seconds) at the Penn Relays, got married, and then approached her world record in the 400 hurdles with a time of 51.61 seconds in Nashville, Tennessee with one hurdle in the wrong position.

Returning to Eugene for the national championships, McLaughlin coasted through the first two rounds with times of 54.11 and 52.90. In the final, Muhammad wasn’t there to press her. She is nursing a hamstring injury and did not have to compete since she has an automatic bye to worlds. Still, McLaughlin ran an astonishing 51.41 with no one close — or even in the frame of photos showing her sprint to the finish line. 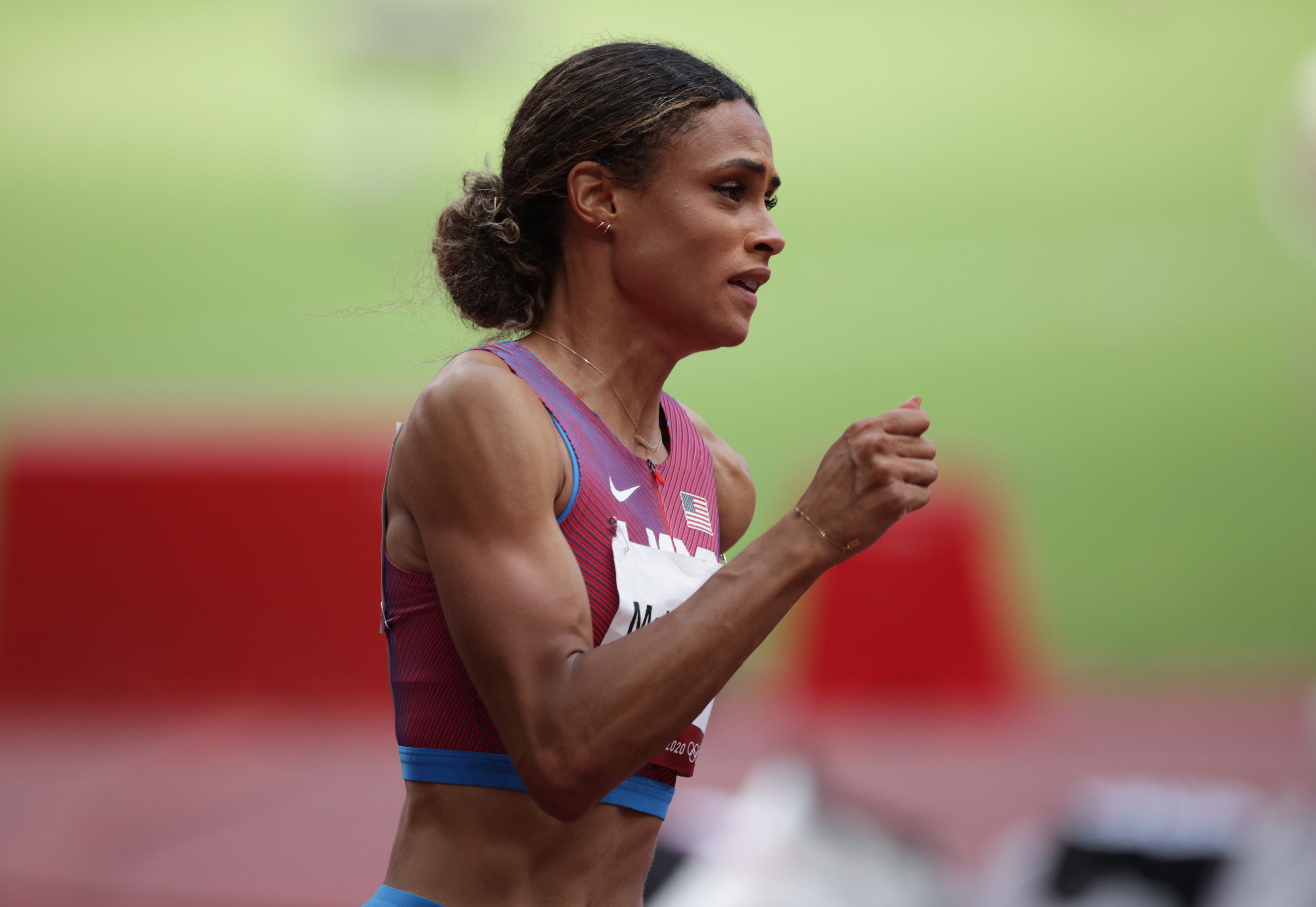 “I knew it was going to be fast,” McLaughlin said. “I looked at the time and I was really happy with it — being able to slowly progress towards lower and lower times — and I think there’s still things I could work on. I think there’s a little bit more in the tank there, so hopefully when it’s time we can just empty it completely.”

Although an announced crowd of only 3,664 people were in the stadium for McLaughlin’s performance, she said she enjoys competing in Track Town USA.

“Every time I come here I can just feel something amazing is going to happen,” McLaughlin said.

She has not lost a 400 hurdles race since Muhammad defeated her in Doha at the 2019 world championships, with both running under the existing world record.

Other athletes also produced sizzling times on the track and prodigious performances in the field. 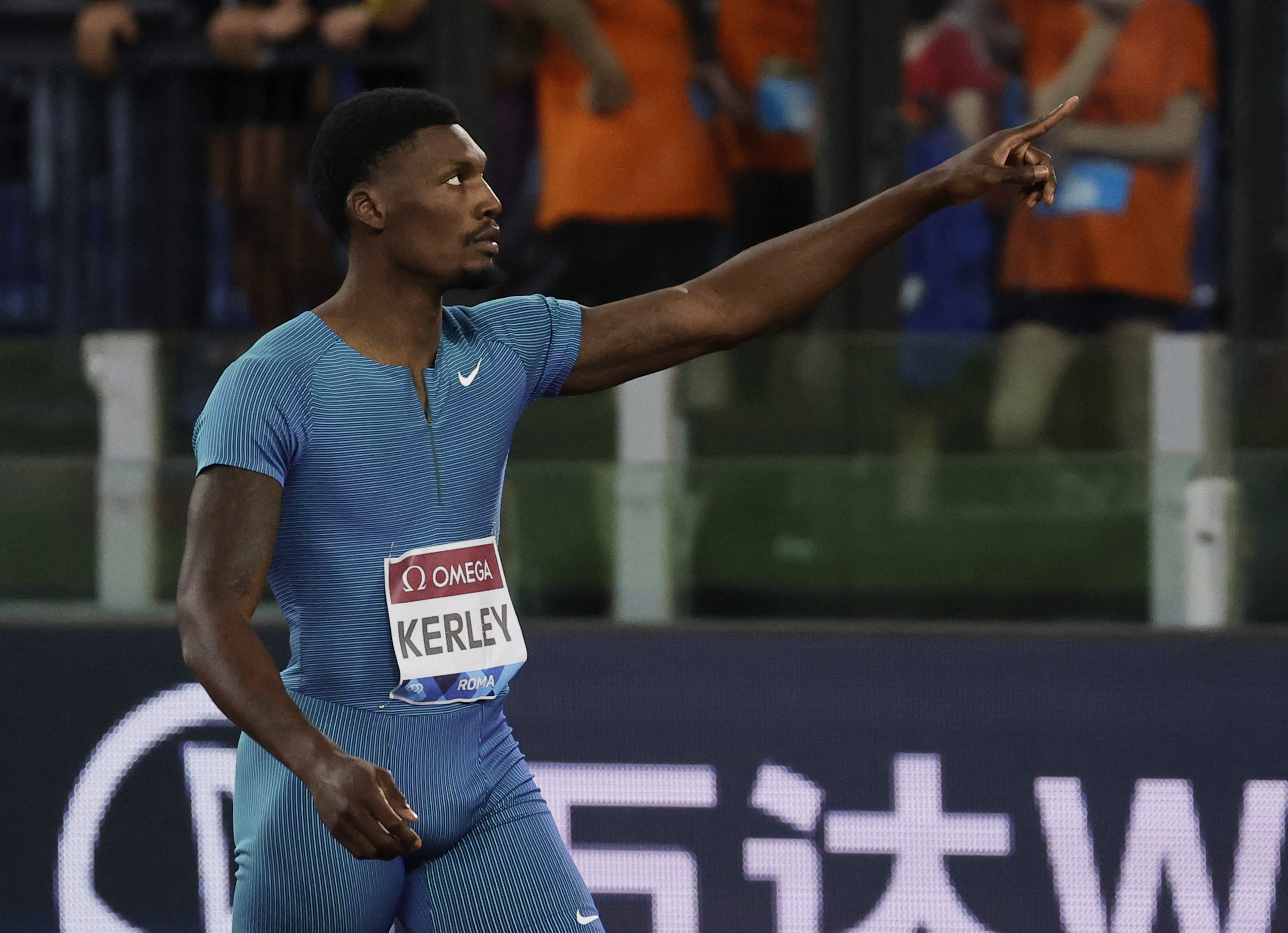 Fred Kerley, the Olympic silver medalist won the 100 meters with a time of 9.77 seconds, just .01 off his world leading time of 9.76 from the semifinals earlier the same day. He also placed third in the 200 with a time of 19.83 seconds.

Kerley qualified for his third outdoor World Athletics Championships, but at different distances than he did in 2017 and 2019. Kerley won the bronze in the 400m at the 2019 World Championships in Doha along with a gold on the 4x400m relay.

Michael Norman ran a world leading time of 43.56 to win the men’s 400, bettering his own 43.60 from the Prefontaine Classic in May on the same track. He now owns the three fastest times at Hayward Field, having also run 43.61.

Norman has never won an individual medal at a world championships or Olympic Games, having finished fifth in Tokyo and failing to reach the final in Doha in 2019. “It does give me a little bit more comfort knowing that I’ve gone through the process and know what the experience is like,” he said. “I just want a different outcome.”

Abby Steiner lowered her own world best to 21.77 seconds in the women’s 200, which stood for only a few hours until Shericka Jackson ran 21.55 seconds at the Jamaican nationals.

Rai Benjamin posted a world-leading time of 47.04 in the men’s 400-meter hurdles after recovering from a bad bout of Covid-19.

Noah Lyles surged past 18-year-old phenom Erriyon Knighton at the tape in the final of the men’s 200, pointing his finger at the youngster as he crossed the finish line.

The gesture, which fractionally slowed his momentum, could have cost Lyles the race with Knighton right beside him.

“To be honest,” Lyles said, “I risked it for the biscuit.” 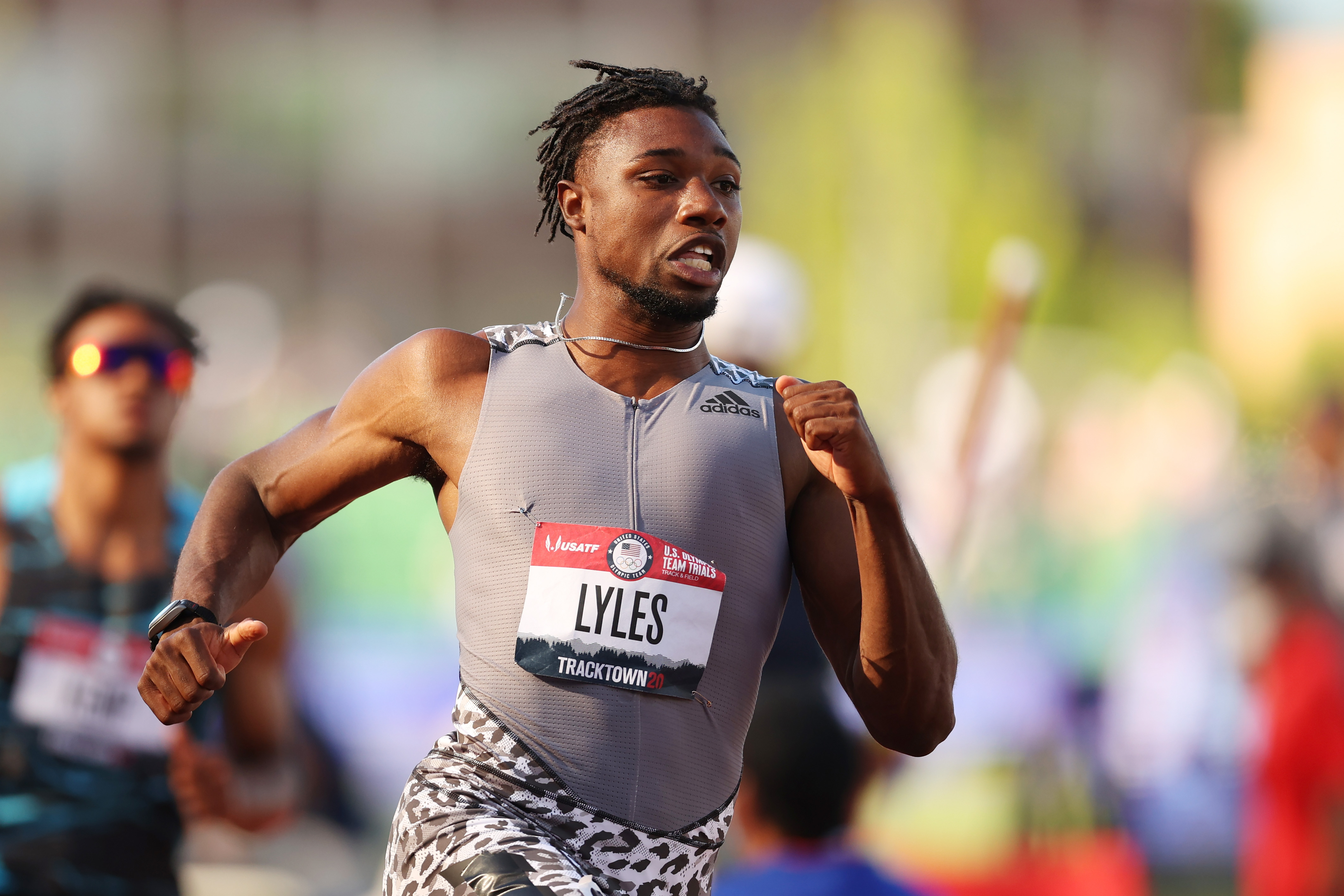 As defending world champion in the event, Lyles could have even scratched from the final, as Christian Coleman, Nia Ali and Grant Holloway did in the events in which they also have a bye into Oregon22.

Because Knighton holds the world lead of 19.49, the fourth-fastest time in history, Lyles said he wanted to prove he still has the speed to contend for the world title.

“I’m pointing at all those people who kept doubting me, all year and all last year,” Lyles said, “everybody who keeps saying, ‘He’s out of the picture.”

Knighton did not appreciate the gesture and was dismayed by the loss. He stalked off during the post-race television interview, after vowing to “Just come back and win. The job’s not finished, it’s never finished.”

Lyles shouted after him, “It ain’t finished!”

An American legend also isn’t finished. In her farewell season, Allyson Felix is expected to be named to her 10th world championships team in the relay pool after placing sixth in the women’s 400m with a time of 51.24.

Felix, 36, made her first appearance at senior nationals 21 years ago.

“I’m happy I have no more open 400s ever in life,” Felix said with a laugh. “I wanted to come here, put myself in a position to be considered for one of the relays, so I can’t be upset. I’m grateful for all of the memories and happy I did it one more time.” 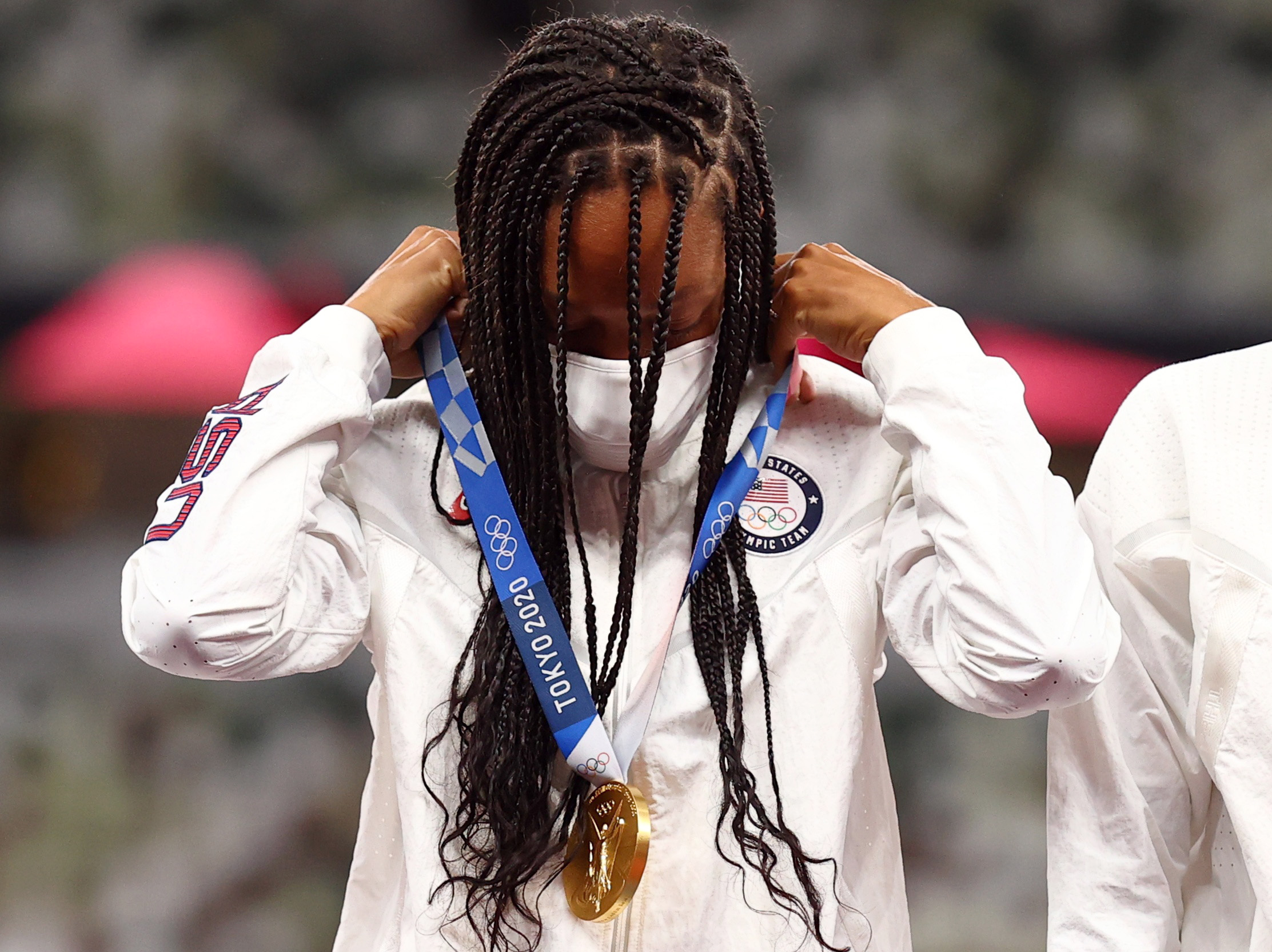 Felix is the most decorated U.S. track and field athlete and has 13 world championships gold medals, three silvers and two bronzes.

The future of the 400, however, is in the hands of the next generation. Talitha Diggs, daughter of four-time Olympian Joetta Clark and niece of Hazel Clark, won the 400 in 50.22 to make her first national team.

“To see my mom and my aunt win so many of these titles, for me to get my own is a blessing,” said Diggs, who is the only US woman to break 50 seconds this season with a 49.99 for No. 4 on the world list.

Olympic gold medalist Athing Mu, who turned 20 on June 8, has not lost a race outdoors at any distance since age 17, but came awfully close to ending her streak.

Ajee’ Wilson pulled abreast with her in the final push for the line, but couldn’t quite beat her.

Olympic champion Ryan Crouser, who has achieved every major honor save a world title, won his fifth national title with a world-leading heave of 23.12m in the men’s shot put. That mark tied the fourth-best throw in history and he owns the top three. On his third attempt, Crouser surpassed reigning world champion and long-time rival Joe Kovacs, who was second with a season best of 22.87.

Chase Ealey had a huge throw of 20.51 meters, the second-best in U.S. history, to win the women’s shot put, and added another throw of 20.19 for good measure. Keturah Orji posted the third-best triple jump by a US athlete with a leap of 14.79 to win her sixth US crown.

Emma Coburn won her 10th title in the women’s 3,000-meter steeplechase while Kara Winger won her ninth in the javelin as world leader Maggie Malone had three fouls. Malone is still expected to make the team based on her world ranking and the fact that no one besides Winger has met the world championships standard.

Among the upsets, Olympic bronze medalist Gabby Thomas placed eighth in the 200 meters in 22.47 after coping with a hamstring injury the past two weeks.