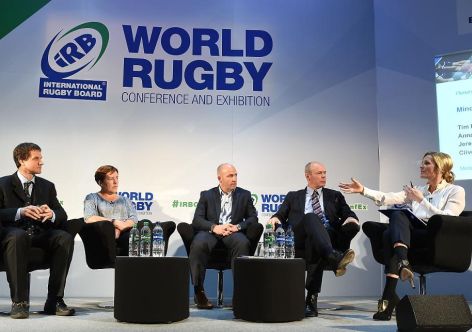 (ATR) The future of rugby will be the focus of the third World Rugby Conference and Exhibition to be held in the London Hilton from Nov. 14-15.

This year’s conference includes a panel titled "Breaking New Markets" that will discuss rugby’s position on the global scale and what opportunities exist for further expansion over the next 10 years.

The year 2015 was another record-breaking year for the federation as more than 7.73 million men, women and children are now playing the game across 121 member unions. World Rugby says it is peaking at the right time.

"Driven by the record-breaking success of Rugby World Cup 2015 as an investment and participation driver and with a ground-breaking first Rugby World Cup in Asia in 2019 and game-changing Olympic re-inclusion on the immediate horizon, the sport is perfectly positioned to break into and build its profile in new and emerging markets," World Rugby said in a statement.

"This panel will allow us to explore the opportunities for rugby as the game continues to grow globally and we are delighted to confirm a highly qualified line-up of speakers who will all bring a unique set of experiences and perspectives to what is sure to be a fascinating discussion," said World Rugby chief executive officer Brett Gosper.

Before the Rio 2016 Paralympic Games come to a close, leaders of the International Paralympic Committee along with World Academy of Sport will host an Inclusion Summit.

The event will take place from Sept. 15-16 in Rio de Janeiro as part of the IPC Academy Campus and seeks to provide a forum to discuss inclusion and accessibility in the Olympic Movement and how these issues impact society.

Those wishing to attend the summit can register at the early bird discount of $1,000 before July 15 when the price rises to $1,100.

Around the Rings is the Official Online Media Partner of the Paralympic Inclusion Summit.

The third edition of the Host City convention will take place in Glasgow, Scotland from Nov. 21-22.

The convention that gathers international federations, event owners, rights holders and suppliers was originally set to be held earlier in November but was changed in order to synchronize with the schedules of the World Anti-Doping Agency and Association of National Olympic Committees.

WADA president Craig Reedie is one of the 13 speakers announced for the event thus far. Joining him in Glasgow is secretary general of the International Ski Federation Sarah Lewis, Turkey NOC president Ugur Erdener and Terre des Hommes secretary general Ignacio Packer among others.

Topics of discussion at the conference will include the integrity of sports, security at major events, entertainment at sporting events and technological and economic changes to the sporting industry.

The convention is expected to draw in more than 350 delegates from host cities, event suppliers and event organizers.

The ninth edition of the Peace and Sport International Forum is set to take place in Monaco from Nov. 23-25.

The three-day forum will bring together more than 500 leaders in the international sports movement, politics and the private sector to discuss opportunities to spread peace through sport.

This year’s edition of the Peace and Sport Awards, one of the most highly anticipated events of the forum, will take place on Nov. 24.

The third edition of the Smart Cities and Sport Summit will be held in Lausanne, Switzerland from Oct. 10-12.

Those seeking to expand their knowledge about how sports and cities interact in more sustainable and beneficial ways can now register for the event.

The annual summit features abundant networking opportunities with many leaders of International Federations, city and regional representatives as well as other important stakeholders of the Olympic Movement.

Delegates who register before July 15 will receive the early bird discount. Guarantee your spot at the conference by registering here.

Around the Ringsis a Media Partner of the Smart Cities and Sport Summit.