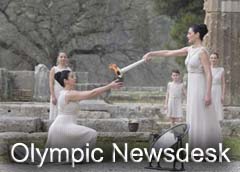 The U.S. Olympic Committee will ask the Court for Arbitration of Sport to rule on whether the so-called "Osaka Rule" banishing some drug cheats from the Olympics amounts to double punishment.

The rule bans athletes from competing at the next Olympics if they receive a suspension longer than six months – even if that suspension is served before the Games.

In a joint press release, the IOC and USOC say they will abide by the ruling handed down by CAS, expected in a few months. The USOC has yet to file its petition to CAS.

"In the interest of ensuring that all eligible athletes are able to compete in their respective Olympic qualification process, and to establish a degree of certainty as we head towards the Olympic Games in London, the USOC and the IOC have agreed to place the question of the regulation before the CAS for a definitive ruling," said USOC chief executive Scott Blackmun.

"This arbitration will provide certainty in the lead up to the 2012 London Olympic Games," says IOC director general Christophe de Kepper in the release.

If CAS rules in favor of the USOC petition, the way could be cleared for U.S. sprinter LaShawn Merritt to compete in London. The 400m specialist was suspended for 21 months in October 2010 for a doping violation. The CAS ruling could affect other athletes around the world as well.

The USOC says the ruling from CAS is not driven by the Merritt case, but in the interest of clarifying the IOC rule as qualifying gets underway for the 26 sports on the London Olympics program.

The secretary general of the Qatar Olympic Committee says the tiny Gulf state is a fitting host for this weekend’s World Conference on Sport and the Environment.

"As a nation we are proud of our role as world leaders in sustainable technology and we are already transferring this knowledge and experience into the sporting arena through the use of zero carbon, solar technology that will be used to cool the 2022 FIFA World Cup stadiums and training sites."

Also in Doha, the IOC will award its 2011 Sport and Environment Awards to recognize outstanding initiatives in the field of sustainable sport and environment.

New Zealand’s journey to London 2012 is underway with Olympic champion swimmer Danyon Loader behind the wheel.

The three-time medalist took the driver’s seat of a traditional London black cab early Thursday to mark the beginning of the New Zealand Olympic Committee’s road to next year’s Games.

"The approach is very different to anything we’ve done before and we’re looking forward to Kiwis being part of it."

Passersby can snap photos of the black cab throughout its cross-country tour and then upload them to nz2012.com to win prizes.

Olympic medalists and other VIPs will be on hand in Auckland for Thursday night’s waterfront gala to celebrate the NZOC’s launch of its 2012 campaign.

Jon Tibbs to Aid Man U

Noted Olympics communications and marketing consultant Jon Tibbs ison board with Manchester United, aiming to boost. the international image of the Premier League stalwart. The Kent-based Jon Tibbs Associates has worked on a number of Olympic bid campaigns, including Sochi 2014 and the Munich bid for the 2018 Winter Olympics. JTA has been on the job with Man U since January.