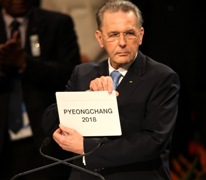 during the 123rd IOC session on July 6, 2011 in Durban, South Africa. The annual general meeting of the members of the International Olympic Committee held in Durban will decide today which of the three candidate cities, Munich, Annecy or PyeongChang will host the 2018 Olympic Winter Games.

(ATR) IOC members tell Around the Rings that PyeongChang is a deserving winner in the 2018 Winter Olympics race and a boost for the Olympic Movement.

The Korean city won a landslide victory in Wednesday's IOC vote in Durban, beating out rivals Annecy and Munich in the first round.

PyeongChang garnered 63 votes, Munich 25 and Annecy just seven. It was the biggest margin of victory in an Olympic bid race since Salt Lake City won hosting rights for the 2002 Games.

IOC president Jacques Rogge told reporters at a joint press conference with the PyeongChang bid team that he understood the disappointment of Annecy and Munich.

"But there is maybe a lesson in the achievement of PyeongChang in that persistence and perseverance have prevailed and were important [after two failed bids]."

Commenting on the defeated candidates, Rogge added: "They did bring a lot of good ideas and creativity and they were not rewarded this time.

"I hope we see a bid from them in the future."

Alex Gilady from Israel said: "It's a good victory and shows that if you have the character of an Olympian... you fail once or twice you try again and you win.

Italy's Mario Pescante, who is leading the Rome 2020 Summer Olympic bid, said PyeongChang's win, like Rio de Janeiro's in the 2016 race, underlined the importance of taking the Olympics to new markets.

"It is a new reality, not only sporting but economic. This is confirmation of this tendency. The revenues and sponsorship is very important also... this means it opens another door."

Zambia's Patrick Chamunda reckoned the voting IOC members had appreciated PyeongChang's efforts "in being consistent and persistent in pursuit of the Olympic dream.

"There was a general expression of sympathy and confidence in PyeongChang."

He added: "We have to explore new areas of potential growth for the Olympic Movement and PyeongChang offers that possibility."

He said: "There were two winners - PyeongChang and the Olympic Movement overall. It was another continent, another opportunity for growth."

Popov said the Korean Games would be good for athletes.

"Everything is athlete-oriented, the [Olympic] village, accommodation, travel times, access to the venues. So the concept of PyeongChang won the competition."

Princess Haya of the United Arab Emirates described it as a "great result".

"I think all three cities were wonderful," added the head of the International Equestrian Federation.

Richard Peterkin, IOC member in St. Lucia says PyeongChang was on a roll.

"Clearly they had the momentum since [the IOC technical briefing in Lausanne] and I think they had a wonderful presentation. But I don’t think last-minute presentations make a difference. When you see a majority like that, it was clear it was theirs to lose."

Richard Pound, IOC member from Canada, was the scrutineer of the 2018 votes in the IOC Session and says he had to keep a poker face when he saw the sheet with the first-round results.

"I was surprised by the margin of victory. I thought it might go to a second round. Anybody who has followed this campaign would know there was only one city that could win on the first round."

Pound says he understands the pain of Annecy’s weak showing.

"Even more surprising is seven for Annecy. We had that for Quebec in 2002, seven votes, and that was when the IOC members from the bid country could vote. That meant we got five votes, plus the two from Canada. That’s a real slap."

Carrion, who oversaw TV negotiations with the U.S. just awarded to NBC, says he believes broadcasters will be happy with the 2018 Winter Games being held in South Korea.

Written and reported in Durban by Ed Hula and Mark Bisson