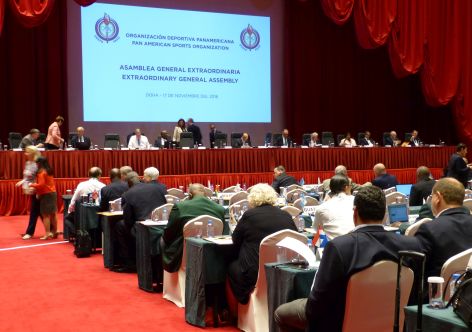 Pan Am Sports is proud to sponsor Around the Rings' coverage from June 12 to June 19.

The assembly will be moved to Prague, Czech Republic on the heels of the Association of National Olympic Committees General Assembly in November. PASO president Neven Ilic confirmed the move to Around the Rings during the Americas Best Practices Symposium in Miami, Florida on June 13.

"Today in Lima they have many things to do and everybody will be in Prague," Ilic tells ATR. "So it will be very easy for us to have the assembly there.

"They have many things to do and we want to give [Peru] all the time to work specifically on the Games," Ilic says.

Organizers of the Lima 2019 Pan Ams are behind schedule with major construction projects including the Pan American Athletes Village. The construction is slated to begin in September.

While the PASO constitution stipulates the host of the Pan Ams must also host the General Assembly two years prior to the Games, PASO executives approved Lima to host the 2018 assembly instead.

"This is the deal that we have," Ilic says.

Ilic also notes that the change of venue was not a result of the devastating floods that Peru suffered in April. The country is still recovering from the damage caused to thousands of homes.

The PASO assembly was originally scheduled to be held in September after the IOC Session takes place in Lima from Sep. 13-17. The change alleviates hosting pressures on Peru after it stages what will undoubtedly be one of the largest IOC Sessions in recent memory given the IOC proposal to award both the 2024 and 2028 Olympic Games.

The move to Prague follows a PASO precedent of holding important assemblies alongside the ANOC General Assembly. In November 2016, PASO delegates convened in Doha, Qatar after the ANOC assembly to approve its new constitution and pave the way for the election of president Ilic and the new executive committee.

PASO delegates will once again come together after the ANOC assembly on Nov. 4. The assembly is expected to approve Santiago, Chile as the host city of the 2023 Pan Am Games after its only other competitor Buenos Aires, Argentina dropped from contention.