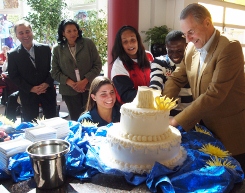 Monday marked his first time here since 2001, a trip USOC officials tell Around the Rings was his first National Olympic Committee visit after election.

A lot's changed in the 10 years since, Rogge saw during a morning stop at the NOC's new downtown digs followed by a lunch-time walk-through of the nearby Olympic Training Center.

Throughout the tour, Rogge fired off questions, cracked joke after joke and even appeared ready to offer medical advice to an injured weightlifter at one point.

OTC doctor Dustin Nabhan was in the middle of examining Natalie Burgener's strained quadriceps when he realized he had perhaps gotten too technical for the audience at hand.

He then applauded the USOC for its choice of imaging hardware.

"GE is a very good company," he said of the longtime Olympic sponsor.

Minutes later, the IOC delegation was shown an office where athletes get fitted for custom mouth guards.

At each stop, the IOC president wished good luck to U.S. gymnasts, cyclists, triathletes, pentathletes and everyone in between. Several of the training gyms were less busy than usual due to ongoing world championships in gymnastics and fencing, OTC staff noted, and many of the athletes still there are due to depart any day now for the Pan American Games in Guadalajara, Mexico.

Bach, also president of the German Olympic Sports Confederation, tells ATR he was very impressed with the facilities but enjoyed most his time talking with athletes over lunch in the OTC dining hall.

When asked if he picked up any training secrets to take back home to NOC headquarters, he only laughed.

Despite their two-hour tour of the OTC, Rogge and company are in Colorado Springs primarily to attend the tail-end of the Fifth International Athletes' Forum.

Given its proximity to Thursday's landmark ruling by the Court of Arbitration for Sport, the gathering of 100+ representatives from the athlete committees of various international federations, continental associations and the World Anti-Doping Agency is the first opportunity for gauging reactions to the overturned Osaka Rule.

IOC member Anita DeFrantz says she was in and out of Monday morning's closed-door sessions at the Broadmoor Hotel but understands the issue was discussed.

"We don't want cheaters," she tells ATR, adding that the sense she's getting among athletes is that they understand why CAS ruled against the IOC but recognize that the need for such a measure is there.

Until last week, a suspension of six months or longer sidelined an athlete from the next Olympics, a setup CAS determined was akin to a second punishment for a single offense.

A bronze medalist rower, DeFrantz says she understands why some athletes practicing sports in which careers do not last as long were against the controversial rule.

She, however, wants convicted dopers banned from the Games for life. Coaches, trainers and any other enablers must also serve some time, she says.

"Not their posse," DeFrantz tells ATR. "Entourage, I guess, is a better word."

Chairman Frank Fredericks says no additions are needed to the agenda of Tuesday morning's meeting of the IOC Athletes' Commission in order to accommodate the Osaka Rule.

"We have discussed it before, and we will discuss it tomorrow," he explained, adding that he expects nothing more or less than your typical regular yearly meeting.

Fredericks declined to reveal any of the forum's final recommendations and remarks that would be delivered later Monday by Rogge, again behind closed doors.

A spokesman with the IOC tells ATR he expects those conclusions are likely to be released Wednesday and will feature several newsworthy items, including one on doping.