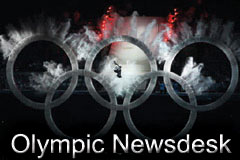 Nuzman Back at Work

Rio 2016 chief Carlos Arthur Nuzman is back at work after being hospitalized last week with heart problems.

A statement from Rio 2016 says "Specific tests showed that the irregular heartbeat has been reversed and Nuzman was released by his cardiologist, Dr. Mauricio Vaisman."

Nuzman responded to emails from Around the Ringson Monday and seemed in upbeat spirits.

On tap for Nuzman’s schedule is a meeting to discuss Brazilian Olympic Committee (COB) work for the Pan American Games in Guadalajara and preparations for the 2016 Olympics. Nuzman is also the COB’s president.

According to a statement posted by Medvedev’s office, the two met at the St. Petersburg economic forum to discuss "cooperation" between Russia and the IOC ahead of the Sochi Olympics.

"Cooperation between the Russian Federation and the IOC is developing very well," Medvedev said. "In any case, we are very happy. This allows us to successfully address the challenges our country faces, including with regards to preparations for the Olympics."

"Let me congratulate you on the success of your economic forum,which was very well organized," Rogge was quoted by Medvedev's office.

"And of course I would also like to congratulate you on the fact that a significant event such as the Football World Cup will be held in Russia in 2018."

No other details were released.

NBC executives are opening up – a bit – about how they beat out rival bidders ABC/ESPN and Fox for U.S. television rights to the Olympics through 2020.

The proceedings were broadcast via closed-circuit TV to all NBC/Comcast employees.