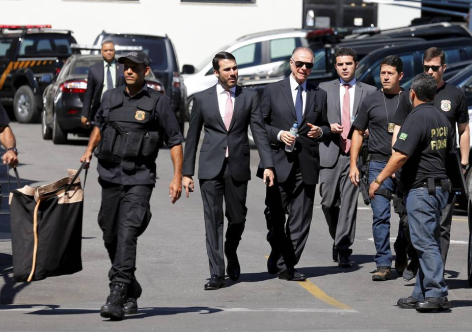 (ATR) Carlos Nuzman's lawyers are requesting a habeas corpus this week to get the Brazilian Olympic Committee (COB) president out of jail while Edson Menezes was confirmed as head of the Rio 2016 Organizing Committee after a meeting of that council on Tuesday.

For the next 180 days, Rio 2016 will be led by the first vice president Menezes, after which a new meeting will elect a new president. Menezes had assumed the interim presidency of Rio 2016 after Nuzman’s arrest on Oct. 5.

The option to keep Menezes as president of the Rio 2016 Committee was based on the entity's statutes which say that in case of temporary vacancy of the presidency, the first vice president assumes the role of president.

"The statutory rule was applied, the temporary removal of the president implies that the first vice president assumed [the position]," Sergio Mazzillo, a lawyer for Carlos Nuzman, said on Brazilian television. "Work will continue. The removal of Nuzman is temporary and the statute foresees that. There is no proper deliberation in this respect, only the application of the statutory rule. The Committee continues to seek a definitive solution to all its problems."

Rio 2016 must still negotiate around $40 million in debt with creditors, and restore its relationship with the International Olympic Committee (IOC).

Today, Brazilian prosecutors formally charged Nuzman and the former director of the Organizing CommitteeLeonardo Gryner for corruption, along with former Rio Governor Sergio Cabral and businessman Arthur Soares. Prosecutors also charged Lamine and Papa Diack with corruption for accepting bribes from Cabral and Soares, allegedly facilitated by Nuzman and Gryner.

On Oct. 14, Gryner was released from a Brazilian prison after the judge Marcelo Bretas revoked the preventive detention against him.

On Oct. 16, Nuzman's disciplinary record in the State Department of Penitentiary Administration was obtained by the Brazilian media. The document includes Nuzman's prison photo. The administration secretary denies that he has disclosed the form.

Last week, while still in prison, Nuzman resigned as COB president after 22 years in charge of the entity.

In a short letter of two paragraphs, Nuzman said that he would relinquish his position "in an irrefutable and irreversible way" and that he would "pursue the full exercise" of his right of defense.

After Numzan’s arrest the IOC provisionally suspended his honorary membership. The IOC also formally suspended ties with Rio 2016. Brazilian athletes would still be able to compete under the Brazilian flag for PyeongChang 2018 as part of the decision.

In its official release the IOC said it closed all its obligations with Rio 2016 in December 2016, as confirmed by the Organizing Committee.

Written by Miguel Hernandez with additional reporting by Aaron Bauer