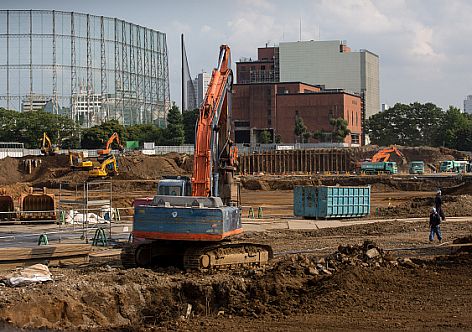 TOKYO, JAPAN - JUNE 25: Work continues at the site of the new National stadium and the planned main site of the Tokyo 2020 summer Olympics on June 25, 2015 in Tokyo, Japan. Despite heavy criticism from respected Japanese architects and a 90 billion yen price rise since Iraqi-British architect Zaha Hadid's design was originally selected in 2012. Japan announced in a report on June 24, that it will continue with construction but have altered the design in an attempt to cut costs. (Photo by Chris McGrath/Getty Images)

The original completion date for the stadium was slated for April 2020, just a few months before the Games get underway. Coates now wants the stadium finished by January in order to give six months for final preparations and opening ceremony rehearsals.

"As we advised during a meeting earlier this week, at least six months is needed for additional overlay in the stadium, technical installation, Olympic Broadcasting preparations and rehearsals for the Opening Ceremony," Coates said in a statement.

"It was going to be April on a very tight schedule. I cannot easily say yes to January 2020. I can only ask contractors to finish the construction as quickly as possible. We have no idea if it’s doable," Endo said.

This request from the IOC follows a series of issues relating to construction of the national stadium. In July, the original design of the stadium by architecture firm Zaha Hadid was scrapped due to inflating construction costs of the project.

Zaha Hadid criticized reports suggesting the design was the result of ballooning construction costs and said inflation in the construction market in Japan was more to blame.

The organizing committee has yet to replace the original design with a more cost-efficient structure. However, the government has created guidelines to ensure the cost of the stadium remains manageable.

On Thursday, the government announced they would like to cap the cost of the stadium to $1.3 billion instead of the original $2 billion price tag.

The Japan Sports Council will review and select the plans for the new national stadium which will seat 68,000 spectators instead of the original 80,000.

"This is a national project that will continue to deliver for Japan long after the Olympic Games are over and we understand the authorities’ desire to scale back the project and reduce costs. The revised seating capacity of 68,000 is more than adequate for the Olympic Games," Coates said.

In response to calls for a new design, Zaha Hadid has released a 20-minute video urging the government to reconsider their original design which they say is the "only way to achieve value for money in the market."

The firm says starting again with a new design will not save the taxpayers money and could end up costing more in the long run.

"To start the design from scratch is an unnecessary risk which we think the government should reconsider if its aim is to achieve a lower pricer than 252 billion yen. We believe the answer is to introduce more competition between the contractors but to not lose the benefits of the design," the firm says.

The government will begin screening bidders for the new design in September.