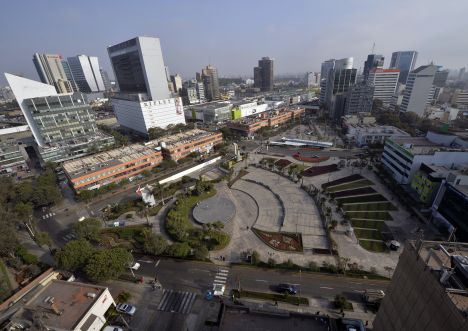 (ATR) The format change for selecting Olympic hosts could make hosting the IOC Session in Lima in 2017 more difficult, according to organizers.

Peru Olympic Committee president Jose Quiñones tells Around the Rings although there could be as many as seven bidders for the 2024 Olympics, they will be able to accommodate them.

"The change in the IOC selection rules will be a great challenge for us, but I think it is a good decision. Lima will receive all the bid cities in 2017 and will work closely with the IOC to host a great Session," Quiñones says.

The voting change eliminates the shortlist phase from the 2024 Olympic bid race, allowing all candidate cities to attend and present during the IOC Session in Lima.

The change came during an IOC Session that featured only two cities bidding to host the 2022 Winter Olympics. Several other cities dropped out of the process after faltering support from their governments.

Quiñones was at the session in Kuala Lumpur along with his team of six members from the POC, local government, strategic partners and a representative from the hotel that will host the Lima Session.

"We stayed six days and had meetings with all the areas involved in the organization of the Session. Our team was received by the IOC, the LOC, the convention center and the Mandarin Hotel staff. We learned in detail about what the IOC requires from us, and how to accomplish this," Quiñones tells ATR.

Three companies are bidding to be the professional conference organizer for the session. A delegate from each company attended the session in Kuala Lumpur. Quiñones says the NOC will decide on the organizer before the end of October.

The organizers will have a better understanding of the size of the event by mid-September when all candidate cities must officially submit bids to the IOC. The deadline for interested cities to apply is September 15, and barring any late dropouts will determine how many cities will attend the IOC Session in Lima.

Thus far, four cities have confirmed their intentions to host the 2024 Summer Games. Paris, Hamburg, Rome and Budapest are all in the race while the IOC waits to hear from the USOC concerning a replacement for the failed Boston bid as well as potential interest from Toronto and Baku.

Following the session, Quiñones flew back to Toronto before the beginning of the Parapan Am Games on August 7. The Peru NOC presented their report on the 2019 Pan Am Games to be hosted in Lima to the Americas Paralympic Committee.

Quiñones tells ATR they are waiting on a few clarifications regarding the 2019 Parapan Am sport program but that talks between the two parties are going well.