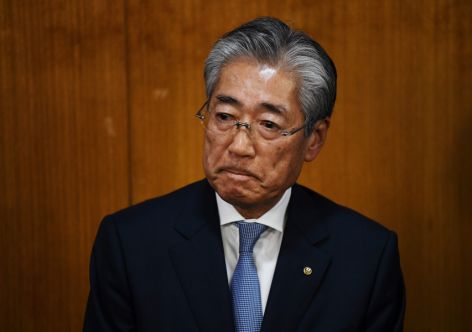 Japan's Olympic Committee President (JOC) Tsunekazu Takeda speaks to the press after a JOC board meeting in Tokyo on March 19, 2019. - The head of Japan's Olympic Committee said on March 19 he would step down in June, as French authorities probe his involvement in payments made before Tokyo was awarded the 2020 Summer Games. (Photo by CHARLY TRIBALLEAU / AFP) (Photo credit should read CHARLY TRIBALLEAU/AFP/Getty Images)

(ATR) The IOC will not punish Tsunekazu Takeda after the Japanese Olympic Committee president’s membership was ended amid a corruption storm.

The ethics case involving the embattled former IOC marketing chief was discussed by the IOC Executive Board meeting in Lausanne on Tuesday.

In a letter to the EB, Takeda once again denied any wrongdoing and protested his innocence in the Tokyo 2020 vote-buying scandal. Last week, he announced that he would resign his JOC presidency and IOC membership in June.

But after discussing the ethics case, and following an in camera meeting of the IOC ethics commission Tuesday, the Olympic ruling body today accepted Takeda’s resignation and agreed it should happen with immediate effect.

"We have the highest respect for his decision," IOC spokesman Mark Adams told a press conference in Lausanne.

Takeda’s early departure means the IOC no longer has jurisdiction over him, a blow for the Tokyo 2020 figurehead but a move that saves face for the IOC and a lengthy ethics investigation that comes with reputational damage for Thomas Bach and his committee.

Takeda’s chairmanship of the IOC’s marketing commission is over too. Around the Ringsis told that a new marketing chief will be appointed in the next few months as part of the annual renewal of the IOC commissions.

A member of the IOC since 2012, Takeda’s exit leaves only one other Japanese member in its ranks in the form of Morinari Watanabe, the president of President of the International Gymnastics Federation.

IOC director of communications Mark Adams hinted that behind the scenes moves could be afoot to give Japan a bigger profile on the IOC ahead of the Tokyo 2020 Games.

"Japan is a very important country in the Olympic Movement… and with the Games coming up even more important. I don’t know what’s being looked at at the moment," he told reporters.

Takeda could yet face charges in a French investigation into the corruption scandal that continues to cloud the Tokyo 2020 bidding process with little over a year to the Games.