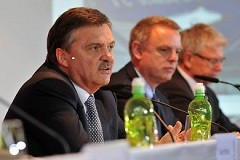 BERNE, SUI - MAY 6: Rene Fasel of the IIHF addresses the media during the press conference for the 2010 World Championships to be held in Germany. (Photo by: Matthew Manor/HHOF-IIHF Images)

(ATR) IOC member from Switzerland Rene Fasel tells Around the Rings he is more concerned than ever about protecting the integrity of sport amid frequent media headlines about doping, match-fixing and illegal betting.

"We [the international federations] have to be united. Integrity is of huge value to sport. If we lose this, we lose everything," the president of the International Ice Hockey Federation told ATR onWednesday.

"The mission of the different federations, the IOC and NOCs is to put all their efforts into fighting this."

The fights against doping and match-fixing were among the issues discussed by delegates at the fifth annual IF Forum. Fasel, as head of the Association of International Winter Olympic Federations, gave the closing remarks to wrap up the two-day conference Wednesday.

In his keynote speech to delegates Tuesday, Moynihan claimed WADA was failing in its quest to catch and punish drug cheats. Under pressure to drop the BOA's lifetime ban on dopers, he explained why his NOC believed only the toughest sanction should apply.

Fasel said he had sympathy with some of Moynihan's comments on the fight against doping.

"I have nothing against that [the lifetime ban]," he said. "If athletes know the conditions when they start competing under the British flag. They know if they [are caught] cheating they are out of the Olympics."

But Fasel insisted it was not the job of WADA to hunt down the cheaters.

"WADA does not have an easy task. The first job of WADA is not to hunt but to prevent. If people are cheating they should be punished and get very strongpenalties," said Fasel.

In the wake of the Court of Arbitration for Sport ruling invalidating the IOC's "Osaka Rule" last month, allowing LaShawn Merritt to compete at London 2012, Fasel said the IOC's anti-doping rules needed tightening.

"We have to adjust our rules in a way that lawyers can't kill them," he said. "At the end we have to have strong penalties."

Olympic champion Merritt successfully appealed the rule barring athletes from the next Olympics if handed a doping ban of more than six months. CAS said the rule was "invalid and unenforceable" and did not comply with the WADA Code.

ThomasBach, chairman of the IOC Juridical Commission, has said the IOC will push WADA to add the Rule 45, the "Osaka Rule", to WADA's Code when it's next reviewed in 2013.

As well as the exchange of information on best practice governance for federations at the IF Forum, Fasel told ATR that there were discussions on how the federations could work with bidding and host cities.

One area for concern is the economic backdrop against which cities are having to justify spending on bids for world championships and other mega-events, he said.

"The social and economic situation in the world is maybe also something we have to analyze and recognize that for cities bidding for world championships it's not so easy any more," he said. "Cities are having some problems with their finances."

Fasel suggested that a lot of the smaller federations would face some challenges.

"The world has changed. There needs to be good leadership. Federations need to be ready to face these challenges," he added.